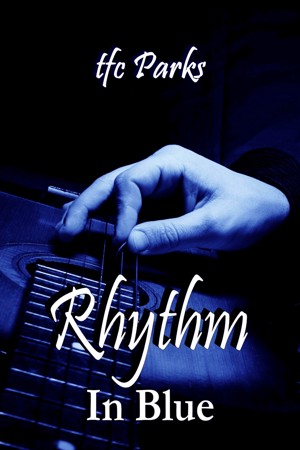 Rated 5.00/5 based on 12 reviews
Rick Rowland isn't your typical rock star - the love and adoration from fans make him uncomfortable. As the bassist for a popular band, the perks are great, but stardom will never make him as happy as the one that got away. Well, more like ran away screaming after Rick's misstep with her young heart. Forgiving himself may be hard, but her forgiveness will be impossible if she won't stop running. More
After running away from an abusive, alcoholic father, Rick Rowland has overcome his past and made a name for himself as the bassist for a popular 70’s rock band. With his choice of beautiful women, and a party-all-the-time lifestyle, Rick knows he’s got it made. But when he meets someone who makes him question who he really is, he wonders if he ran far enough away from his past.

tfc Parks lives in South Dakota with her three children in an old funeral home. She traveled extensively as a youth, and lived in Greece for many years. That experience colors every aspect of her life, writing, and being.

Reviews of Rhythm in Blue by tfc Parks

This whole book is a song. It's sad, and happy, and so real. I loved it, a definate 'must read'!

First book in a long time that I couldn't put down!! Great job!

(reviewed the day of purchase)
Sarah Rose reviewed on March 26, 2011

Awesome and intriguing story! Hard to put down and walk away from, without it following you around .

Rhythm in Blue is probably one of the best books I've read in a long time. At first, I thought it was going to be a straight romance, and that's alright, I can do those once in a while, especially if they're good ones, but this story turned into so much more than I expected. Yeah, there's some romance in it, but I don't think I'd label it that way.

The main character begins his life with a goal of survival, then his goals change to finding success and leading the life he only imagined in his dreams. Once the mission is accomplished, he finds out that living his dreams can't make him happy- he needs more (or less). When he discovers what he needs to be happy, but pushes it out of his reach, his goals become indefinable from that point on, and he stumbles through life recklessly, searching for something to fill the gaping hole in his soul.

The characters in this story are so real, they make you want to hang out with them, maybe give them a nudge or some advice once in a while. The scenes, the uncomfortable situations, and the interactions are just amazing.

Some of my favorite lines/scenes-

...the audacious rivulets ran down her torso and disappeared into her swimsuit. (This one line speaks volumes about the character's state of mind.)

-A melody was singing to him from inside, and he chased after it with the strings and frets, trying to capture it from the recesses of his mind.-

The scene where Rick is stoned out of his mind and hitting on chicks at the party, so cocky, so sure that it's them and not him. Too freakin funny!

-Rick entered his hotel room and headed straight for the phone. He sat on the bed and dialed the number. It took several attempts, as his hands shook uncontrollably. When the connection was made, he began: “Hey, I need to talk to you.” He swallowed hard and sighed, wrapping the phone cord around his fingers to still them.- (This scene literally dropped my jaw!)

-He remained on his side, motionless, his mind spinning out of control, filled with unexplainable anger and hopelessness. From his core, it slowly spread, until it filled every cell in his body, pressing against his nerves, searching for release.- (Pure awesome and gut wrenching!)

I highly recommend this book to anyone looking for a great story- a fantastic story. Well done for sure. I've looked for this in print, but can't find it. Is there somewhere I can buy it?

*I don't normally write reviews, so forgive me if I did it wrong. Not sure you're supposed to actually give quotes, but these ones especially grabbed me by the neck and shook me, and I felt I had to include them. I guess delete me if its too much.

For a first time novelist, or any writer, I think Parks has done a great job.

Oh, what a story to pull me in! The characters were strong, and even through bad choices, had me rooting for them all the way. I found the descriptions vivid, pulling me into the story more and more with each chapter. I felt like I was along for the ride, though bumpy and uncomfortable at times- that just made me hope even more for Rick to win in the end!

Thank you for such a pleasurable read! It isn't often these days that you find such an original story- the kind that completely transports you away from your life.

Whose kid was this hanging around the port, the cafenion, or the ex-patriot parties at all hours, and secretly recording it all with such merciless clarity? Would I be surprised to know? Whoever she is, she helps immortalize the artists' colony on Paros --- good, bad and ugly --- long before the Club Med types moved in and civilized the place. There is no happy-sappy Hollywood music score to Rhythm in Blue; nor silly dance routines down at the harbor. There's a stronger rhythm in the torturous dance between Shelby and Rick as their lives sway forward and back against the blue of Aegean Greece, or a blues from Rick's American band.
Rick and Shelby's story isn't just about a forbidden love affair against all odds, but an act of cultural exploration; a fulminating chapter in ex-patriot literature; at core, a why and how of the ex-patriot heart.
Whoever this kid was, she knows whereof she writes. I was there too...

Nicholas Sparks and Vladimir Nabokov had a baby, and she is TFC Parks. I believe that is the best explanation I can formulate for “Rhythm in Blue.” In this story, the reader is invited into the life of Rick, an abused teen turned rock star. I was drawn into the trials and tribulations of Rick, Shelby, and all of his band mates and friends in beautiful, graphic, painful, sensuous, and heartfelt detail. I know that everyone wants a story that draws you in and makes you read it in one quick sitting. Rest assured, this book has that capacity, but I read it slow, savoring every word, thought, and feeling expressed by the realistic characters. At times, I found myself rereading a section just to relive the emotion, trying to somehow will Rick or his friends to make the right decisions. Maybe I had some fantasy that I could change the heart wrenching parts by re-reading them—that’s just how this story draws the reader in! I felt like I wasn’t just reading the words, I was living right beside Rick, struggling to overcome past history and poor decisions, and win the heart of my one true love at any cost.
TFC Parks does an outstanding job of bringing the reader into the story, set in the late seventies and early to mid eighties, transporting the reader to the beautiful Mediterranean and contrasting this surreal beauty with equal pain and hope. Great first effort by TFC Parks. I can only hope to read more from her in the future. Five stars all the way!

Through vivid detail that quickly and thoroughly transported me onto a Greek island and into the lives of characters I would never know, Parks has presented an imperfect world in which the struggles to find fulfillment are shared by all. Despite material success and the appearance of having it all, these characters emerge as flawed and unsure as any of the rest of us. Highly sensual at times and always engaging, I wasn't ready for the story to end.

The best stories don't tell a story, they bring you into the story. When reading this book, there was never a moment that I didn't feel as though I was actually in the scene and watching these characters come to grips with their various choices.

The center of this story is Rick and Shelby and as we follow them over the course of the novel, we find much to love and hate in each. We hope that they are meant to be together, but the beauty of the writing is that we are never sure what Ms. Parks has in store for them. We do however come to understand each of them, and those around them in dramatic layers that unfold throughout their journey to reconcile, re-invent and define themselves.

In the end this is a less a story about love and more a tale about connections, both the healthy and the dangerous, that help shape our lives. TFC Parks was able to lay out the complexity of these relationships on the page without overplaying the dramatic elements for effect.

Overall, I enjoyed following these characters and I found the writing smart, sensual but also very rhythmic. The mood of the writing stays with you long after you've finished the last page.

Very well done debut for Ms. Parks and I look forward to her next project.

You have subscribed to Smashwords Alerts new release notifications for tfc Parks.

You have been added to tfc Parks's favorite list.

You can also sign-up to receive email notifications whenever tfc Parks releases a new book.