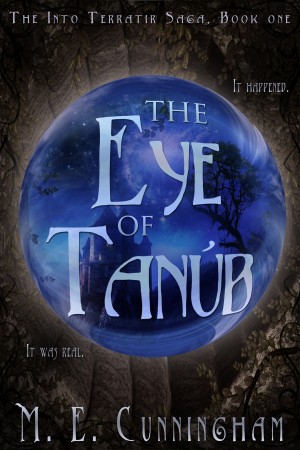 By M.E. Cunningham
Rated 4.67/5 based on 3 reviews
Thrust into the perilous and magical land of Terratir, Lauren Marriott and her brother, Zach, must harness the power of ancient relics to defeat the maniacal Warlord and find their way home. But in the end, does she have the strength to leave such a thrilling place and the man who stole her heart? More
Everyone thinks she's crazy. And maybe she is. But Lauren Marriott knows her journey into Terratir happened. It was real, and she's writing all down in frightening detail.

She has no patience for her brother Zach and his passion for stupid computer games until she finds a mysterious pendant in his room, pulsating with magical power. Lauren wants it, not realizing it's a portal between this world and one of monsters, sorcerers, and dangerous quests.

Never in her wildest dreams could she have imagined what she'd find in the terrifying world of The Warlord—death at every turn, but also a love stronger than time itself.

I am not a gamer, but I totally enjoyed the story.

I am an avid rpg (role-playing game) player whether it be on computer, tabletop or console. I just enjoy having an adventure. The Eye of Tanub is an adventure. Alex and his sister Lauren are portaled into the world of Terratir, which happens to be the game that Alex plays. Alex is so excited to be there where Lauren, well not so much. She is very stuck up and into herself. She dislikes her little brother and I think pretty much anyone who isn't just like her. She is very annoying but every book needs one right? I would totally be Alex though if I got ported to Azeroth in World of Warcraft. I have been playing since beta and I love, love my toons and the world they live in. Unfortunately, I don't get to play as much anymore. You know that adult stuff gets in the way. This book made me all giddy and making me feel like I was back playing.

Alex sees one of his "toons" (playable character within a game) and gets all excited. His character Dardanos is a high level warrior and he is very moody but tough. He and Lauren start a relationship later but I wasn't huge on the romance aspect. I was more into the story of questing and doing certain objectives. Wait, that is what I like in WoW too. They find another "toon" of Alexs named Flitwicket who is a priestess. Love that name. My poor priest in WoW would hate me for calling her Spaanky instead of something really cool. Flitwicket helps Lauren become a priestess as well and Alex trains to become a maverick which I think would be the equivalent to a rogue.

They get a quest to get the Eye of Tanub and well this starts them on a very fun and amazing adventure. I love that it was told by Lauren through her writing a journal after they return. Alex also gets to put his two cents in when Lauren lets him or he steals it and just starts writing in pen to Laurens chagrin. They two perspectives make the book even more of an adventure and you really get both of their views on what actually went down. I don't want to spoil anything because it is just a fun read.

I would recommend this to anyone 12 and up, teens, adventurers, rpg players and anyone who likes a good story set in a fantasy land. This is the first book and part two will be out Dec 19th 2014. You will not have to wait too long for another adventure.

This book reads like an 80's movie and I LOVE it! Think "The Goonies" meets "World of Warcraft" and then you pretty much have the basis for The Eye of Tanub.

This is a YA story aimed at the younger end of the YA spectrum but I can tell you that as a child of the 80's I absolutely LOVED it and I think that many other adults would too.

The characters are vibrant and the world is a video game! Seriously! I think this book was one of the most fun reads I have picked up in a while.

The story is fast paced and definitely a page turner. Whether you pick it up for your child, or just pick it up for a quick read for yourself I don't think you would be disappointed.

**As I do a lot of YA reviews I feel compelled to mention that this book WAS NOT given to me for review despite it being a YA title. I read it because I wanted to**

You have subscribed to alerts for M.E. Cunningham.

You have been added to M.E. Cunningham's favorite list.

You can also sign-up to receive email notifications whenever M.E. Cunningham releases a new book.