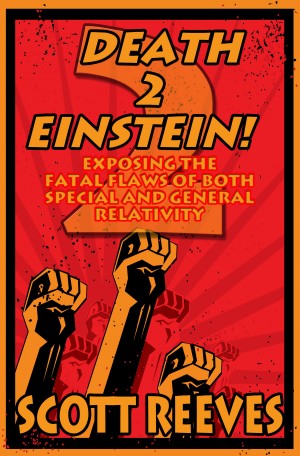 Death to Einstein! 2: Exposing the Fatal Flaws of Both Special and General Relativity

Unlike the previous volume, this one also brings death and mayhem to general relativity by dragging the famous twins out of the special theory and into the general where they belong, and slaying them there. It also tackles spacetime curvature, and receives a visit from Einstein himself, via a paper from 1918, in which the noted physicist attempts to rebut some of the arguments made in the present volume.
Download: epub mobi (Kindle) pdf more Online Reader
lrf pdb
Price: Free! USD
Add to Library
Create Widget
Tags: time dilation general relativity geocentrism relativity of simultaneity twins paradox alternative theories crackpot theories einstein was wrong geocentricity reference frames
About Scott Reeves
Read Scott Reeves's Smashwords Interview
Learn more about Scott Reeves

Since I am a Star Trek fan, a friend of mine suggested that I should check out your YouTube channel and watch your animated parody of the original Star Trek series. I found the parody to be amusing while the animation had a homemade charm. From there I ventured to several of your videos on Einstein’s theories; these I found intriguing. Watching your videos reminds me of a of music genre called low-fi, which I have had difficulty appreciating. The videos led me to your book "Death to Einstein!2: Exposing the Fatal Flaws of Both Special and General Relativity." I have always avoided books that were blatantly negative in tone, but I assumed your title was an attempt to cut through noise and clutter that infuses our modern world and reach people, which has been one of my lifelong goals.
As a writer I appreciated your use of multiple examples to get your points across. Taking a leaf from your book, I’ll use an example to summarize my view of your criticism of Einstein's relativity theories. If an individual was somehow restricted all his life to only dealing with and knowing about the portion of a window air conditioner that was inside the room, he might become quite adept at maintaining a comfortable room temperature and humidity by adjusting the various setting such as fan speed, temperature control etc. During a prolonged heat wave such an individual might think the heat wave could be abated if everyone with an air conditioner opened their front door and let some of the cool air from the house escape into the outside. This individual is representative of those who learned about Einstein’s theories from magazine articles and other popular sources.
Anyone would see the futility of this idea that has been around the outside portion of an air conditioner while it was running. He would have experienced the warm stream of air produced by the outside fan blowing air through the condenser coils. This individual would represent the person who has taken the time to study Einstein’s theories and spent a good deal of time trying to figure out precisely what points Einstein was trying to get across.

We’re all seekers. Some of us have unwoven ourselves from the ferocious loom of the Interstates and turned away from the eternally crowded surface streets. Unwound, we walk lonely back roads illuminated by the lowering sun where every passing car reminds us of what we left behind. We come to a bridge over a stream and stop to reconnect with and wonder about the natural world. The musing that ensues seldom pierces the veil, but sometimes it does, and that is the case with Scott Reeves’s "Death to Einstein! 2: Exposing the Fatal Flaws of Both Special and General Relativity." The arrow has hit the mark. The rawboned title alone of this volume speaks of an intelligence unfettered by the niceties of academia that our noses tell us have seeped like raw sewage into the surrounding lower ground. The ground is now so permeated that it gives its own champions awards for nothing and then finally for less than nothing.
How many flaws does Scott Reeves find with Einstein’s theory of general relativity? How many do you need? When do we see the importance of the trivial? When we discover that everything in everyday life moves or seems to move with the earth. That is everything, but light rays. But, we try in vain to click off a flashlight beam shining out the window of a moving car and watch as the beam sneaks through the woods behind us like a big fish in a small stream. The description doesn’t make sense because we don’t experience light rays moving independently of the earth. No, we don’t see beams of light left behind as the earth whisks along at 18 miles per second. The photons are beyond the moon in less than two seconds. Not even the most unfettered or unhinged Heinlein aficionado or aficionada could conceive of a stream racing so fast that it spilled off the earth, traveled through space and watered an empty lunar sea. There his hearty, lunar pioneers would set up their sparse, modern homestead on the shores of a waveless sea. Yes, everything moves or seems to move with the earth, except light rays.
Studying Einstein’s theories can bring a series of insights: 1. light beams don’t move with the earth, 2. with regard to a single reference frame, Einstein’s category named simultaneous events contains no simultaneous events; 3. with regard to a single reference frame, Einstein’s category named non-simultaneous events includes simultaneous events and non-simultaneous events and 4. Einstein tacitly admits this when he says that the test for simultaneous events only needs to give an unambiguous categorization for every event; it need not be a correct categorization. The strategy of unambiguous categorization has succeeded in many areas: beauty pageants and "Dick Clark’s American Bandstand" come to mind.
As people study Einstein’s theories, I suspect they have a shifting array of his statements that hold their interest. I also suspect that it is difficult to get over the notion that since Einstein said it; it must be true after all he is one of humanities foremost thinkers. At this time, I am struck by this sentence from Einstein’s book "Relativity: The Special and General Theory", “There is only 'one' demand to be made of the definition of simultaneity, namely, that in every real case it must supply us with an empirical decision as to whether or not the conception that has to be defined is fulfilled.” It seems almost churlish to suggest that an observer positioned, not at the midpoint between two distant events, but ¾ of the distance from A to B would supply in every real case an empirical decision as to whether the events at point A and point B (lightning strikes) were simultaneous. It would be an incorrect decision, but it would be an empirical decision. Scott Reeves critique of Einstein’s argument for the relativity of simultaneity is both lucid and coruscating.
Although I am simpatico with his writing, what are we to make of Scott Reeves more curious penchants? Notions that at first seem like ideas that should be deposited in the proximity of the island of lost toys. We can take solace that, at least, he is not a follower of Parmenides who believed that all motion was illusionary. Some of us can’t resist staring into the abyss. Perhaps, he should direct his skeptical gaze toward Bell’s inequality, Riemann-Christoffel curvature tensor and Gödel’s proofs.
It would take more than the few paragraphs I have written to provide a synopsis of Scott Reeves’s critique of Einstein’s theories, I hope I have provided at least a sign post.
A similarity between Einstein and Scott Reeves has just struck me; they both seem to have minor inconsistencies with their book titles. Shouldn’t Einstein’s title "Relativity: The Special and General Theory" be Relativity: The Special Theory and the General Theory or Relativity: Both the Special and the General Theories? Scott Reeves’s "Death to Einstein! 2" is also listed as "Death to Einstein! 2: Exposing the Fatal Flaws of Both Special and General Relativity."