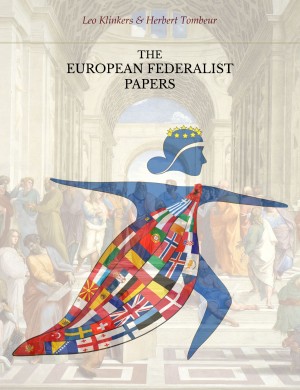 By Leo Klinkers
& Herbert Tombeur
Taking the American Federalist Papers (1787-1788) as the best benchmark, the authors of The European Federalist Papers present the facts and arguments why the current intergovernmental system of the European Union is no longer adequate and has to be replaced by a European Federation like the United States of America in order to guarantee the Citizens’ and Member States' sovereignty. More
Robert A. Levine – former high official of the United States Federal Government – wrote in the New York Times of 9 January 1999 an article entitled: “What the EU Needs Is a Copy of ‘The Federalist Papers’.” Levine makes this remark at the start of the Economic and Monetary Union (EMU). He explains that in the quest for full economic integration, Europe could learn some useful lessons from the United States. This has not happened. Europe began an economic adventure without the support of a proper form of governance. The economic crisis in Europe has made the consequences of that shortcoming clear.

Now, over ten years after Levine’s call the European Federalist Papers are here. A private initiative by three federalists. Bearing in mind the emphasis that Levine puts on ‘lessons’ we write the Papers consistently from best practices.

In 26 Papers we explain why the current operating system of the European Union is no quiet possession, driving the Union into an abyss. Therefore, this intergovernmental system should make way for a federal organization. To convince anti-federalists that this is no superstate, we conclude the Papers with a design for a compact federal European Constitution.
Download: epub
Price: Free! USD
Add to Library
Create Widget
Tags: democracy europe usa federation constitution federalism citizenship us european union eu papers sovereignty lisbon treaty confederation confederalism intergovernmentalism treaty of lisbon
About Leo Klinkers

Leo Klinkers (1943) graduated in 1968 from the Faculty of Law at the University of Utrecht in the Netherlands. After a few years working in local government, he became responsible for research and education in public administration at the Law Faculty of Utrecht from 1971 until 1983. He wrote his PhD thesis in 1974 on open access to Government documents. Between 1971 and 1983 Klinkers developed a method for interactive result-oriented policies and regulations. This methodology has been published in a number of books and articles. He left the University in 1983 to become an independent consultant in public administration. Since then he has applied his methodology in the administrations of Belgium, the Netherlands, Portugal, Indonesia, Thailand, Aruba and Suriname. For more information relating to background, publications and projects: www.kppc.nl.

You have subscribed to Smashwords Alerts new release notifications for Leo Klinkers.

You have been added to Leo Klinkers's favorite list.

You can also sign-up to receive email notifications whenever Leo Klinkers releases a new book.