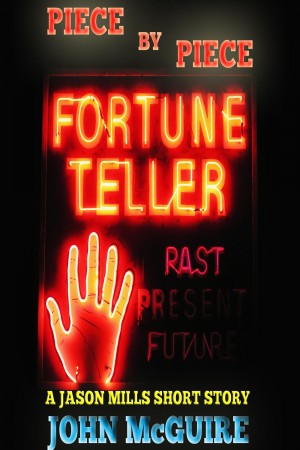 By John McGuire
Rated 5.00/5 based on 1 review
From the pages of The Dark That Follows comes a short story about Jason Mills.

Jason Mills is no ordinary Fortune Teller. As opposed to most of his brethren, Jason can actually see the future. And his latest customer wants to push that gift to its limits.

His love and collection of comic books began when he was 10, in a convenience store in Waycross, Georgia. It wasn’t long afterwards when he started writing his first comic related stories. This passion has continued throughout his adult life as he remains an avid comic book reader and collector.

In 2002, he was a founding member of Terminus Media. It began as a writer’s collective in the back of the Dragon’s Horde Comic Book Store in Decatur, GA. Through the next decade Terminus, published anthologies in which John was both an editor and contributor. The Gilded Age, published in 2013, is his first on-going series. The relationship with Terminus also grew into some Work for Hire opportunities for both corporate and government entities.

In 2009, John joined Headhunta Studios, a collective of Artists and Writers. In 2013, Tiger Style was published by Arena Comics. John currently has projects in production for Arena Comics.

In 2010, John took the story telling skills that he had learned and applied them to the writing of novels and short stories. The Dark That Follows is John McGuire’s debut Novel.

He maintains that he would have been a Marine biologist, if not for Jaws.

Reviews of Piece by Piece by John McGuire

This is a fun tale combining clairvoyance and mystery.

You have subscribed to alerts for John McGuire.

You have been added to John McGuire's favorite list.

You can also sign-up to receive email notifications whenever John McGuire releases a new book.