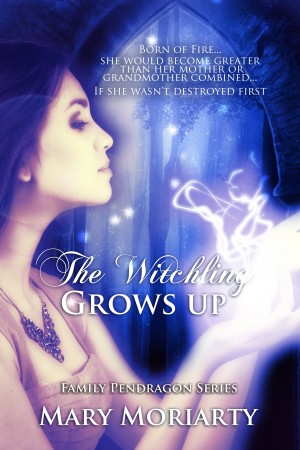 The Witchling Grows Up

I grew up in New England surrounded by a lot of history and story telling by my father who was from the Mid-Coast of Maine. What I remember of my mother was her love of fairy tales, the wee people and poetry. So it’s no wonder I would one day write.
I actually started writing at a very young age, mostly poetry but I loved playing with words. I also loved books and before I even learned to read I would sit and pour over the books that had belonged to my mother. Works by writers such as Dante and Shakespeare filled the shelves. When I was about 6, I remember trying to read a first edition copy of Ivanhoe that belonged to her.

So what does this author do when she isn't writing? Well I write 7 days a week, early in the morning but when not writing I love to read, knit (so I don't kill people... except in my books), chase around all my animals, there are way too many. I drink a lot of tea to keep me going, some people call me a tea snob. I love great tea like some people like great coffee, beer or wine.
I love great tequila but reserve drinking that with one friend of mine.
If you enjoy my books, tell your friends and family. Say hi over at my Facebook author page or my website.

The Witchling Grows Up by Mary Moriarty will enthrall you.

A defiant must for lovers of the Pendragon lore, vampires & witches.

It is a story of family dedication through the hardest of trials persecution of witches and the bonds that last eternity - love of family.

I absolutely loved this book. I fell in love with the characters of Dylan and re feel in love with Justice and William and Emma and Molly. The whole clan of Pendragon and their animal familiars like Tan and Nero. I hope you do too.

The prologue is so well written it reads like it's own novella of the family's past and the epilogue leaves you hanging part two of this amazing new series. :D

Wonderful beginning to a new series. 4.5 stars
Fast paced and action packed with several supernatural beings working together. Wonderful story line with good writing and very entertaining to read. Love the character interplay in this story. Though the story has a good ending it does appear to not be a self-contained story, with the storyline continuing into the next book to complete it. Well written and very enjoyable to read. I was given a copy from the author for and honest review.

(reviewed the day of purchase)
Renee Waring reviewed on July 31, 2014

The Witchling Grows Up is a lead-in novella for a new series by Mary Moriarty and chronicles a brief history of the Pendragon family of witches and how they become connected with the O'Heachthanna vampire clan from her My Beloved Vampire series. The beginning of the story details the lineage of the witch, Dylan Pendragon, back to her great grandparents and leading up to how she came to the notice of Justice, one of the O’Heachthanna (My Beloved Vampire series) clans oldest, most loyal, and fiercest warriors.

The story picks up in present day as Justice arrives at Dylan’s home in Glastonbury Tor, Britian. He has been charged with Dylan’s protection from the ‘Dark One’ by the Goddess, who has also promised Dylan to Justice as his mate, thus uniting the vampires and the witches. Dylan is already being watched and protected by a cacophony of familiars who have been with her family for hundreds, if not thousands, of years. Included in the menagerie is a fierce little dragon who has been charged with her protection from her birth and takes his job very seriously. Tan is a feisty little, fire breathing creature who sits upon her shoulder, follows her everywhere she goes, and does not care one tiny bit for Justice, which makes for some very lively dialogue between the two. The gist of the story is that the ‘Dark One’ must capture Dylan and rob her of her virginity in order to steal all of her powers and become nearly invincible. Justice will need to rescue her before the damage is done or Dylan will be lost forever in the underworld.

This book has captured my interest from page one, and has me anxiously waiting for the next book. Ms. Moriarty’s writing is imaginative, her characters are strong, yet vulnerable, and her storylines flow seamlessly, one into the other. This one gives us a bit more background into the world of vampires and witches and I cannot wait to read more.

You have subscribed to alerts for Mary Moriarty.

You have been added to Mary Moriarty's favorite list.

You can also sign-up to receive email notifications whenever Mary Moriarty releases a new book.