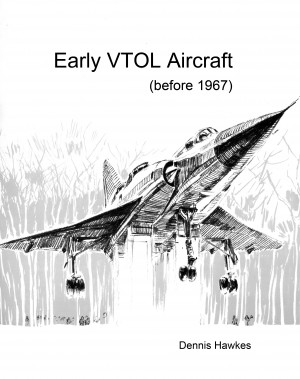 By Dennis Hawkes
This ebook is a brief history, up until late 1967, of vertical take-off and landing aircraft. Originally written before the use of computers it contains some interesting photographs of aircraft some of which failed to go into production and others which proved to be successful. This ebook is offered in the hope that it will prove useful to others interested in the topic of early VTOL aircraft. More
Early vertical take-off and landing (VTOL) aircraft is the subject of this free ebook. Written in 1967 it has been produced in its present electronic form by its author Professor Hawkes in the hope that it will inform and stimulate interest in this exciting topic. The chapters include ones on the autogyro and the true helicopter, the earliest developments and the current (in 1967) developments. Some fixed wing VTOL aircraft that had been developed and flown by then are also considered. Finally some predictions about the future as seen in 1967 are given, some of which came to into being while others failed to develop. The original document was written before the use of computers and now the Internet would provide all of this information very easily but it was thought useful to reproduce the original as a free ebook for the modern reader.
Download: epub mobi (Kindle) pdf more Online Reader
rtf lrf pdb txt
Price: Free! USD
Add to Library
Create Widget
Tags: history aircraft helicopters vtol stol
About Dennis Hawkes

Emeritus Professors Dennis and Freda Hawkes live in Wales, UK and have lectured and jointly led a research team at a university until retirement. They are members of an evangelical church where Dennis was a church leader until retiring and have taught the bible for many years, mostly to students and young professionals. Their experience has led them to offer these resources to help other people to start to read and understand the bible.

Reviews of Early VTOL Aircraft (before 1967) by Dennis Hawkes

You have subscribed to alerts for Dennis Hawkes.

You have been added to Dennis Hawkes's favorite list.

You can also sign-up to receive email notifications whenever Dennis Hawkes releases a new book.