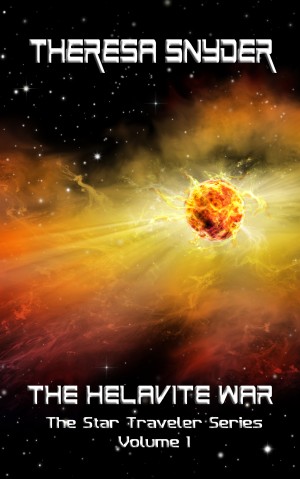 “The Helavite War takes me back to when I first read the early science fiction works of Heinlein, Asimov, etc. There is a sense of boldness, innocence and the essential goodness of mankind, wrapped up in a universe that is bigger than we know now and yet navigable by humans.” – JKMohr

Jake is a human mercenary looking for a quiet place to rest, when his Protect Dar-dolf attacks the last living Henu, Arr. Feeling responsible, Jake stays on to care for Arr, as the alien with deep blue cat eyes and unusual abilities recovers.

Jake takes on the role of teacher, mentor, father, and lost brother for his new alien friend. He and Arr share adventures dealing with the Hydra, a race of lizard-like creatures who kidnap members of other species to sell on the black market as slaves; battle the Narnon on Gligula where Tuldavian Swamp Lizards lay their traps just below the surface of the slime; and engage in numerous other missions while learning to appreciate each others rare abilities.

Ultimately, they must face their toughest foe, the Helavites, a species which has been preying on the weaker beings in the universe for generations. In the underground catacombs of these beetle-like creatures a mystery is solved and the grounds for the resurrection of an old world are laid.
Download: epub pdf rtf more Online Reader
lrf pdb txt
Price: Free! USD
Add to Library
Create Widget
Tags: scifi adventure young adult teens science fiction aliens invasion star traveler mercenaries for hire henu
About Theresa Snyder

Theresa Snyder is a multi-genre writer with an internationally read blog. Theresa grew up on a diet of B&W Scifi films like Forbidden Planet and The Day the Earth Stood Still. She is a voracious reader and her character driven writing is influenced by the early works of Ray Bradbury, Robert Heinlein, Anne McCaffery and L. Ron Hubbard. She loves to travel, but makes her home in Oregon where her elder father and she share a home and the maintenance of the resident cat, wild birds, squirrels, garden and an occasional dragon house guest.

Reviews of The Helavite War by Theresa Snyder

Review
James Jenkins reviewed on June 3, 2017
(no rating)
I am not the audience for this book a bit to much 'space opera' for my taste. The words all work together and the intro appears accurate, as far as I got before putting this down.

In this first novel in the "Star Traveler Series" Theresa Snyder sends us into a unspecified Star Wars style future, where mankind travels smoothly between a star system and the other in the galaxy, populated by numerous species of aliens, some very sociable and others a bit less. In this almost fairy-tale setting we follow the adventures of the human Jake and the young Henu Arr, mercenaries with sound principles, who in the course of several years are facing daring situations and dangerous enemies. But the real strength of the story is the fraternal relationship between the two protagonists. On the one hand there is Jake, used to a solitary life, who in one of his many trips encounters the young Henu, last survivor of his alien species, and takes him under his wing, as if he were a younger brother. The bound between the two is strong and more than once takes the reader to be moved while feeling the suffering of Arr, when he is separated from Jake.
This type of space opera, suitable for an audience of any age, is different from the more film style one I'm used to. The story does not have a single thread, apart from the friendship of Arr and Jake, but unfolds through a series of very enjoyable episodes, which make it a fascinating and light reading that finds its strength in the characters.
I recommend it to any reader who loves stories with good feelings and many spaceships.

A fast paced romp across the spaceways with mercenaries who learn the value of bonding. The story is well written and promises to be a start of a great series. I already bought the next one in the series.

You have subscribed to alerts for Theresa Snyder.

You have been added to Theresa Snyder's favorite list.

You can also sign-up to receive email notifications whenever Theresa Snyder releases a new book.