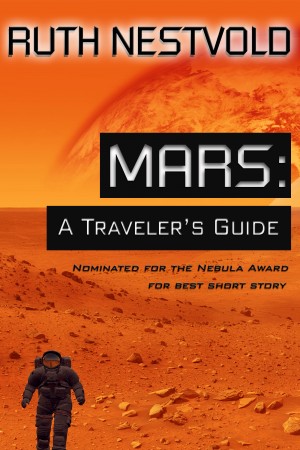 By Ruth Nestvold
Rated 5.00/5 based on 5 reviews
Red Planet Adventures provides customized tours on Mars. Naturally, they have been optimized for safety. Soon, satellite coverage on the planet will even reach 100%! But what happens in the meantime ... ?

"Mars: A Traveler's Guide" was originally published in The Magazine of Fantasy and Science Fiction in January 2008. It was nominated for the Nebula Award in 2009. More
"Ruth Nestvold's clever story "Mars: A Traveler's Guide" is simply wonderful. Written as a series of encyclopedia entries being accessed by someone unseen, it explains the workings of the planetary world on which it takes place, but also slowly reveals the compelling story of the person accessing it. Brilliant." (Five Stars)
John DeNardo in SF Signal

"This one is great satire on the drawbacks of computerized help systems."
Sam Tomaino in SFRevu

A former assistant professor of English in the picturesque town of Freiburg on the edge of the Black Forest, Ruth Nestvold has given up theory for imagination. The university career has been replaced by a small software localization business, and the Black Forest by the parrots of Bad Cannstatt, where she lives with her fantasy, her family, her books and no cats in a house with a turret. Her short fiction has appeared in numerous markets, including Asimov's, F&SF, Baen's Universe, Strange Horizons, Scifiction, and Gardner Dozois's Year's Best Science Fiction. Her fiction has been nominated for the Nebula, Tiptree, and Sturgeon Awards. In 2007, the Italian translation of her novella "Looking Through Lace" won the "Premio Italia" award for best international work. Her novel Flamme und Harfe appeared in translation with the German imprint of Random House, Penhaligon, in 2009 and has since been translated into Dutch and Italian.

Reviews of Mars: A Traveler's Guide by Ruth Nestvold

Short, but carries the message. Starts slow as topics in a travel guide and starts to reveal the situation.

Short and succinct. I'm pretty sure I will not be booking a tour of Mars through Red Planet Adventures any time soon but I will be re-reading this again.

Started a little ho hum, but then I figured out what was going on.

A very dry, wry piece of humor. A good read when you need to keep things in perspective.

Fun little story. Reminded me a bit of Hitch Hiker's Guide, and I mean that very complimentary.

You have subscribed to alerts for Ruth Nestvold.

You have been added to Ruth Nestvold's favorite list.

You can also sign-up to receive email notifications whenever Ruth Nestvold releases a new book.