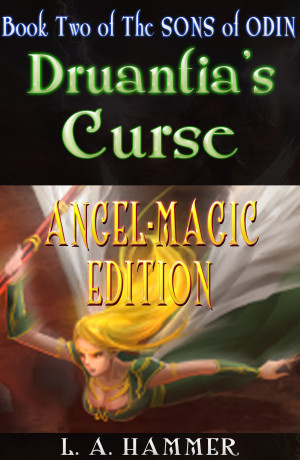 By L A Hammer
Adult

. . . Hammer offers readers lavish battles, dizzying amounts of gore, and a system of magical patrons called Battle Angels that fans of the Final Fantasy video games should enjoy. - Kirkus Reviews
BlueInk Reviews said - die-hard fans will appreciate the Robert Jordan-esque layering of characters, relationships and lands that brings Kismeria to life - BlueInk Reviews More
L.A. Hammer has now published four novels, the first three books in the Sons of Odin series, and also Book Four; Balor's Might. His first: Book One of the Sons of Odin; Odin’s Awakening, was published in 2012:

Druantia's Curse is entertaining and full of surprises from wormholes to vampires, but it requires dedication to track all of the subplots. Casual readers of fantasy may be frustrated by the wealth of detail, but die-hard fans will appreciate the Robert Jordan-esque layering of characters, relationships and lands that brings Kismeria to life - BlueInk Reviews

In this second installment of Hammer’s (Odin’s Awakening, 2014) epic fantasy series, the complexities of magical warfare and romantic loyalties continue. Taking center stage once again, however, are the action sequences. They’re akin to panoramic oil paintings of orgiastic chaos, as when “Hawks, Crows and Pixies broke away from the Shadow Men to punch through vampire chests in bright flares....Skulls exploded on impact, limbs falling as torn debris.” – Kirkus Reviews

The use of time-travel and other twists—like the fallout from a romantic triangle among Adem, Jean, and Princess Isabella—deftly prepares fans for a rousing sequel. – Kirkus Reviews

In this fantasy debut, four individuals visit a war-torn realm full of monsters and magic, seeking to fulfill an ancient prophecy. - Kirkus Reviews

In the opening volume of a complex new fantasy series, Hammer offers readers lavish battles, dizzying amounts of gore, and a system of magical patrons called Battle Angels that fans of the Final Fantasy video games should enjoy. - Kirkus Reviews

The battles, during which the Sons of Odin—and Jean, the Daughter of Thor—summon superpowered guardians, are splatterfests (demons are blasted “into dust and smoke, torn flesh and large spurts of dark blood”). – Kirkus Reviews

Hammer’s prose is often dense with imagery, as when “Anna, the crew,” and “the bushland were all swallowed by a vortex of light and shadows,” and “the light exploded into tiny filaments of burning gold and white energies.” - Kirkus Reviews

In his third installment of the series, Hammer continues to tap a vein of phantasmagoric mayhem that should mesmerize video gamers and fans of the Lord of the Rings alike. Nearly every page displays eye-popping battle visuals: “Lightning filled the sky, a rainbow of coloured bolts, a thousand falling every second to turn the grey haze into a bright neon flare.” - Kirkus Reviews

Provides an action-packed turning point in the series and sets the stage for fresh adventures. - Kirkus Reviews

Book Three of the Sons of Odin; Arawn’s Carnage, was published in 2014, and this book concludes the first half of the main series. Hammer intends to write a second half of at least three books, as well as a middle series of books that detail the events of Highlander’s son and grandson on their adventures in Kismeria.
Download: epub pdf lrf more Online Reader
pdb txt
Price: Free! USD
Add to Library
Create Widget
Tags: dragons elves fantasy wizards magic adventure dragons adventure fantasy dragons adventure sci fi dragons and wizards dragons and elves and fairies dragons and demons dragons and hellhounds dragons and vampires
About L A Hammer

L. A. Hammer has a Bachelor of Arts in Fine Art Painting and Literature studies. He is currently studying his Masters of Writing and Literature, while preparing a Masters’ exegesis of a new King Arthur mash up, with Cleopatra, Robin Hood, Julius Caesar and Dracula, all rolled into the one adventure, and that’s just a few of the planned names to feature in this metaphorical reality where animals and humans fight side by side, and magicians are a rare breed. The exegesis will be complemented with studies into Arthurian Celtic Legends of the 12th to 13th centuries A.D. and looking at religious symbolism in such stories, as well as studying Joseph Campbell’s hero journey, Freud’s Interpretation of Dreams, Carl Jung, and other related texts.

Hammer has walked the Kokoda Track at age 16, and has swum with white tipped reef sharks on the Great Barrier Reef in northern Queensland at a similar age. His childhood holidays included many trips to Queensland, including Expo ’88, and a crocodile cruise at night where he played spotlight boy at the front of the boat. He fed the giant milkfish at the Darwin Aquascene at about age 8. He has many fond memories of those days, as well as his high school studies at a country college where he flourished in his love for art, reading and writing, drama, though his passion for reading fantasy novels began at a much younger age.

Hammer has plans to continue writing Sons of Odin in many new editions, with Books Four to Five in preparation to create in print, another 800 page single volume, though the writing of Book Five and edits to Book Four may take a few years longer. There will be another 800 page Book Six at least, with a possible middle series of six books that detail the early adventures of Highlander’s son and grandson, Pendral and Rayne Dragonsword.

Learn more about L A Hammer

Also in Series: Books of the Sons of Odin

You have subscribed to alerts for L A Hammer.

You have been added to L A Hammer's favorite list.

You can also sign-up to receive email notifications whenever L A Hammer releases a new book.