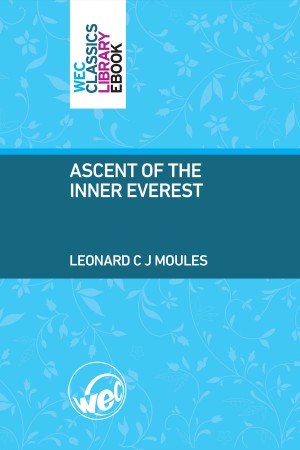 Ascent of the Inner Everest

By Leonard Moules
This book is about the ascent of Len's personal inner Everest. He says 'My experiences of God are also pages of a living theological thesis. Often I have been confused by the loose usage of spiritual terminology; sometimes baffled by the fixed terms of reference to special "blessings". Thus I look back through forty years of walking with Jesus as the predominant Personality in my life.' More
Len says 'It is natural for me to equate the Christian life with a mountaineering expedition. I love mountains. The major portion of twenty years' missionary service has been in the High Himalaya. The tangled mass of eternal snows, glaciers, ice falls and deep valleys was the world of my missionary commission. I lived amongst remote people who were simple, honest, brave and hardworking. They came to accept me. Some came to accept my Saviour.'

Len goes on to say 'Life to me is one great expedition. It is the ascent of a personal inner Everest. My experiences of God are also pages of a living theological thesis. Often I have been confused by the loose usage of spiritual terminology; sometimes baffled by the fixed terms of reference to special "blessings". Thus I look back through forty years of walking with Jesus as the predominant Personality in my life. He has led me in an ordered way — in spite of myself!

To David, the Psalmist, the Lord was his Shepherd. To Paul, the call of Christ was involvement as a soldier, or as an athlete in the games. Have not I a similar privilege to see in Jesus Christ my Guide and Climbing Companion? This is the viewpoint of this book.

These studies have been shared at Youth camps, also at a convention for the deepening of the spiritual life at Bethany Fellowship, Minneapolis, U.S.A. I am now asked to help others to climb. It may tend to lose that anointed personal touch by appearing in cold print, but I have just risen from my knees after prayer to our mighty God through Jesus Christ for that enabling to help you climb high on your own Inner Everest.
Download: epub mobi (Kindle) pdf more Online Reader
rtf lrf pdb txt
Price: Free! USD
Add to Library
Create Widget
Tags: confession perspective camp separation problems sanctification vision restitution everest identification in christ assault equipment crucifiction morale intercession consecration identification casualty adventure and action ascent confession of faith climbing and mountaineering
About Leonard Moules

Len Moules was born in Acton Green, west London in 1912, and became part of theyoung people's group at the Acton Railway Mission. Having made Christ Lord of his life, he developed an interest in Tibet. He went with WEC International to work in northern India in 1936, and married Iris Smith in 1941. He did military service in the Middle East 1941-45. In 1957 he became British Secretary, and in1966 International Secretary of WEC International. Len died in 1978. His story is told in 'On to the Summit' by Pat Wraight.

You have subscribed to alerts for Leonard Moules.

You have been added to Leonard Moules's favorite list.

You can also sign-up to receive email notifications whenever Leonard Moules releases a new book.