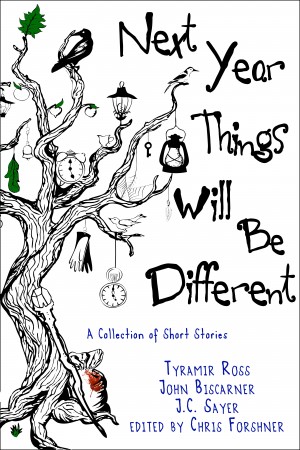 Next Year, Things Will Be Different

Next Year by Tyramir Ross
Walker may not have finished high school yet, but he and his team are certainly finishing off every one of the G'laek they can. Now they face one of the oldest and most powerful of the ancient demons they have encountered. Can Walker use the power granted to him in Quellios of the Rising Waves, the great staff that conjures fire, as well as his own brains to save himself and his friends?

Illusion Of Choice by John Biscarner
When given the chance to have everything your heart desires, what would you ask for? Many of us have thought of what we would ask for, but have we ever really thought about the consequences of said wishes? Darren, a young teen, has been asked a simple question: "What do you want from life?"

Tyramir Ross was born with a real name that is not this pen name somewhere in Canada. A recluse and hermit, he prefers that you’d read his book to discover who he is, as that has more clues to his character and psyche than any mundane listing of geographical and historical factoids ever could.

You have subscribed to alerts for Tyramir Ross.

You have been added to Tyramir Ross's favorite list.

You can also sign-up to receive email notifications whenever Tyramir Ross releases a new book.