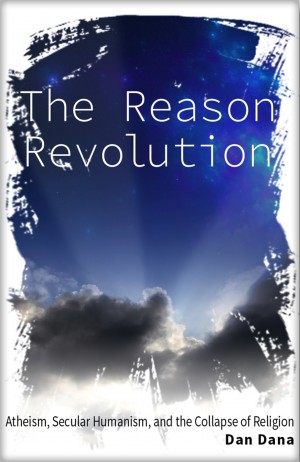 The Reason Revolution: Atheism, Secular Humanism, and the Collapse of Religion

Dan Dana is retired from a career encompassing psychology, teaching, mediation, corporate training, and business entrepreneurship. He is the author of two books on workplace mediation and several conflict resolution curricula. Born in 1945 on a family farm in Missouri, his life experiences include serving in the U.S. Army in Panama and Vietnam (1966-68, noncombat), earning a PhD in counseling psychology (1977), teaching at a university in New England for 28 years, founding and growing a successful internet-based educational enterprise (endowed to a Florida college in 2013), being a candidate for the U.S. House of Representatives (1998), and living, working, or traveling in over 75 countries on all seven continents. Dan and his wife Susan live in Sarasota, Florida. He is the father of one and grandfather of two.

Reviews of The Reason Revolution: Atheism, Secular Humanism, and the Collapse of Religion by Dan Dana

Psychologist Dan Dana lays out a clear and concise introduction to scientifically-oriented secular humanism as a compelling worldview. He boldly predicts the growth of present trends toward secularism and points the way to a brighter future for humanity. When you feel your hope eroding at the latest depressing news of religious terrorism or conflict, read this book.

Who would dare show the many faults in the circular reasoning of this e-book, with the obvious Smashwords official Publisher's pro-atheism review of these series of assertions in the form of an e-book (See through the OnLine-Reader: "It focuses squarely on the inherent irrationality of religion, and reveals its utter irreconcilability with science."). Providing no bibliography, and an off-the-cuff directive to Google searches, this e-book starts out from an unreasonable form of metaphysics, i.e., claiming to be free of metaphysics, by some undivine mandate.

What's perhaps most comical is the assertion that "religion" will collapse, as if it were one whole comprehensive unit, leaving the author's "religion" unscathed. But how is "religion" defined, for starters? The e-book mysteriously skips it.

If only all author's contributions in e-book form (as in the category of Fiction) could be freed from providing reference support for their core assertions...

My e-book actually states a contrary assertion, yet learned from consequence, not prophesy: "Believe it or not, we’ve come to realize the hard way: 'Live and let live.' has its limits."

Want to explain why you're an atheist to someone who doesn't share your views? Recommend they read this book. It's a short but concise (and pleasant) read that lays out why atheism makes sense without flaming people of faith. Fair and respectful, it may not convince someone to leave their faith but it should at least get them to understand WHY an increasing number of people have.

Societies have evolved and gods have evolved with them. Dan Dana explains the history of religions in a concise manner.
It's time for humans to evolve from their psychological dependency on fantastical, supernatural beings.
The list of what a future, reason based society would be like is what every human should support.
Believers of all faiths should take time to read this book. It is short, takes very little of your time.
It will explain why atheists want a reasonable world.
Thank you, Dan Dana.

I greatly enjoyed Dan Dana’s logical and well-structured prediction of the separation of Church and State and his eloquent, non-confrontational approach to religious doctrines that he describes as losing a grip on people as they become more knowledgeable about the true nature of the universe and of mankind. Of course, a key to the better knowledge lies in the teaching of natural sciences, which is likely to carry along a decrease in religious beliefs, which in turn may lead to a decline in political clout.
In fact, ‘The Reason Revolution’ moves us away from superstition and magic, shifting the belief from a personal god that gives individual, personal attention and promises eternal bliss after death, towards looking for the ultimate truth in an impersonal creation of the cosmos.
Now, Dan Dana is not alone with his thinking. Already, the Catholic priest and scientist Georges Lemaître, who proposed what became the Big Bang theory in 1927, said “as far as I can see, such a theory remains entirely outside any metaphysical or religious question. It leaves the materialist free to deny any transcendental Being… For the believer, it removes any attempt at familiarity with God… It is consonant with Isaiah speaking of the hidden God, hidden even in the beginning of the universe.”
Similarly, if we are searching for God, the renowned theologian Hans Küng advocates to look no closer than the Big Bang.
And now, as recently as October 28th, 2014, Pope Francis says that the Big Bang theory does not contradict the role of God – a bona fide recognition of science in its broadest term.
May we then speculate that the Catholic Church is now looking at the Big Bang as the point at which religious belief and science might reconcile? Can we presume that the American Evangelicals will follow suit? Some probably will, others may hang onto old biblical beliefs as long as they can. Nevertheless, with the Catholic Church evolving into the acceptance of science, we may bet on an increase in overall religious tolerance and a decline in religious political power, hopefully leading to an effective separation of Church and State in America in a not too distant future, as we see it in major European countries today.
An inspiring book.

Dan Dana does a terrific job of providing a logical and systematic review of the concept of religious beliefs. It will insult, hurt, anger and provoke any theist from any faith but I've found based on my own journey is that those feelings are like seeds.

Those thoughts, questions or "seeds" may take weeks, months or even years to grow but for any human being with compassion and intelligence they will force them to really think hard and begin to question what they've held so dear.

As someone who began to think religion was bunk at a very early age I can attest that the journey could t are some time. It took me 30 years to finally "come out" and I've never felt more free. So long as a religious person will engage you in conversation or debate, just encourage them to read the book. If nothing else but to invite them to refute it. I assure you if any of them have an inkling of doubt or question, Dan's book will plant those seeds.

I too look forward to many of his predictions and promoting books such as this can only us all achieve a world where religion becomes nothing more than a subject taught as part of history and sociology curriculums only and the many buildings get repurposed.

Dan Dana’s “The Reason Revolution – Atheism, Secular Humanism and the Collapse of Religion” is a wonderfully concise and emotion-free analysis of the key arguments in favor of atheism and separation of church and state. Meticulously avoiding the casting of blame on believers, Dana nonetheless uncompromisingly elucidates the inherent error in trying to put “revealed” knowledge on an equal footing with scientific fact. His work is an eloquent plea for all to recognize the primacy of verifiable or evidence-based claims over the wishful thinking of traditionalist ideologies which require faith to sustain them.

Having never believed religion to be more credible than Santa Claus, I have always been an atheist. However, I never formally studied atheism, nor fully contemplated the implications of a world without religion. This book crystalized my views on skepticism, reinforced my firmly held belief that morality and religion are unconnected concepts, and provided encouraging and visionary predictions of a world without religious influence. I recommend this for all “street” atheists, like I was, and most certainly for any questioning theists, looking for alternative ways to think about our existence.

Dan's writing style is simply elegant. It is concise, logical and right to the point. Given the sensitivity of the subject matter, he manages to reach out to the readers with nothing but the utmost respect.

Although this book is primarily intended to those of Faith who have an opened mind and who may be yearning for clarity, it did me a world of good as well: After a long indoctrination into the Catholic Church from early childhood, I needed a point of reference to better define my own atheist assertion. Dan's brilliant work provided this important element and much, much more. It was a joy to read. I recommend The Reason Revolution to anyone.

(review of free book)
Darren Woolsey reviewed on Aug. 16, 2014
(no rating)
I would suggest that the author read P.D. Ouspensky's In Search of the Miraculous: Fragments of an Unknown Teaching, then read the expositions of G.I. Gurdjieff, in particular, All & Everything, which is a series of three books, the first of which is An Objectively Impartial Criticism of the Life of Man, or Beelzebub's Tales to his Grandson. If the author thinks his little book is likely to invoke or inflame some readers, perhaps his beloved reason alone will be ruffled somewhat by Gurdjieff's writings.

You have subscribed to alerts for Dan Dana.

You have been added to Dan Dana's favorite list.

You can also sign-up to receive email notifications whenever Dan Dana releases a new book.