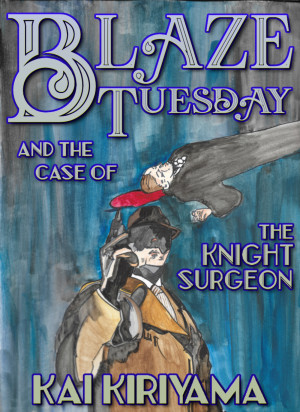 Blaze Tuesday and the Case of the Knight Surgeon (Special Edition)

By Kai Kiriyama
New York's most accomplished PI, Blaze Tuesday is a guy who gets results. Hired to investigate the murder of a charity doctor, Blaze finds himself embroiled in a conspiracy that spans from the lowest illegal surgeries in Hell's Kitchen to the medical elite and the corporations who make clockwork body parts. Agatha Christie meets Repo! The Genetic Opera on the streets of New York. More
Clockwork body parts are touted as a medical miracle by the companies who make them, and high fashion by the stars who sport them, and a lot of kids go through illegal surgeries. The sub-culture of Gearheads is full of kids with robotic body parts from poorly done surgery in less-than-sanitary conditions, and these are surgeries that don’t always take.

Blaze Tuesday is New York's most accomplished private investigator. A former police officer with a bone to pick with the corruption in the city, he's earned a name for himself as a guy who gets results, and who is willing to uphold the moral values so many others have forgotten, even if he has to break a few faces to do it.

Blaze is hired by Wayside Firms, one of the medical firms that produces the Clockwork, when a charity doctor who worked specifically with less-fortunate kids who have had botched illegal, is found murdered. As Blaze investigates the unfortunate death, he discovers a conspiracy that stretches from the lowest gutters in Hell’s Kitchen, to the highest corporate fat cats at the medical firms who create the Clockwork body parts.

Can Blaze get justice for the dead doctor, and bring some hope back to the kids in Hell's Kitchen who were counting on the Doctor's help? Or will he get caught up in the underworld of body modification and the big money it brings in?
Available ebook formats: epub mobi pdf rtf lrf pdb txt html
First 40% Sample: epub mobi (Kindle) lrf more Online Reader
pdb
Price: $0.99 USD
Buy Add to Library Give as a Gift
How gifting works
Create Widget
Tags: crime pulp steampunk noir noir crime crime action steampunk crime fantasy pulp crime fiction
About Kai Kiriyama

A writer of many things and many genres, Kai is currently working on a novel (you can pretty much always assume that she's writing something!) that involves murder, mayhem and probably a ghost or some other form of otherworldly creature. She is also working on some non-fiction but she's not entirely sure why.

Kai has been writing for far too long and she's convinced that both her "to be read" and "to be written" lists will never be completed before she dies. She has a diploma in palmistry and can read hands with an accuracy that most people don't expect. She is also accomplished at tea leaf reading and crystal divination, both of which she has also achieved a diploma for and scares herself with the accuracy of the things she has predicted.

A time-travelling, demon hunting, Asgardian geek, with an affinity for Pokemon and Shakespeare, you can be sure that there will be general insanity and dubious wisdom dispensed no matter where you chat with her. As always, she requests that you "be excellent to each other" while she's away.

Kai currently lives in Canada, but if she told you where, you'd have about fifteen seconds to assume the party position before the special ops team arrives.
She can be reached by email at kai@theraggedyauthor.com
You can find Kai on twitter @RaggedyAuthor
You can also find Kai on her website www.theraggedyauthor.com

You have subscribed to alerts for Kai Kiriyama.

You have been added to Kai Kiriyama's favorite list.

You can also sign-up to receive email notifications whenever Kai Kiriyama releases a new book.