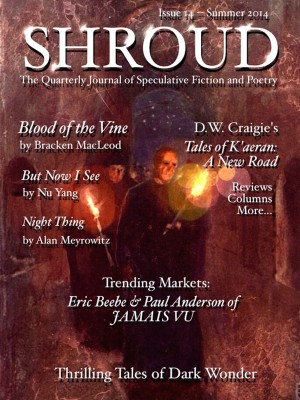 Shroud 14: The Quarterly Journal of Speculative Fiction and Poetry (Volume 4)

But Now I See
by Nu Yang

Blood of the Vine
by Bracken MacLeod

Shroud Publishing LLC is a NH publisher of dark speculative fiction. In 2007, Shroud Publishing launched Shroud Magazine, the Journal of Dark Fiction and Art (a Black Quill nominee), which in 2008 was selected by Ingram Periodicals for North American retail distribution through the Barnes & Noble retail chain. Shroud has produced three anthologies, two of which were simultaneously recommended for Bram Stoker Awards from the Horror Writers’ Association with BENEATH THE SURFACE ultimately garnering the nomination. After twelve issues, several novellas and novels, Shroud has had the privilege of publishing many established and new authors -- many of which have gone on to win awards and have established successful careers in writing.

Reviews of Shroud 14: The Quarterly Journal of Speculative Fiction and Poetry (Volume 4) by Shroud Publishing

You have subscribed to alerts for Shroud Publishing.

You have been added to Shroud Publishing's favorite list.

You can also sign-up to receive email notifications whenever Shroud Publishing releases a new book.