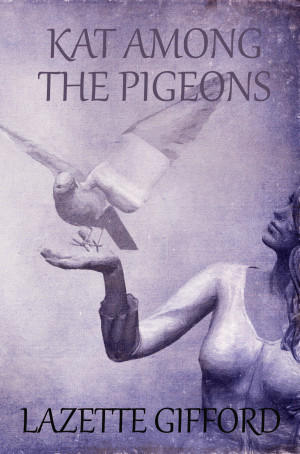 Kat Among The Pigeons

By Lazette Gifford
Rated 4.22/5 based on 9 reviews
(Updated Version 10/29/15) Kat and her boyfriend frantically fight the enemy with the aid of a lazy tom cat, an African gray parrot who only speaks in verse, and a wise-cracking cockatiel with a bad attitude.

She's trying very hard not to think the world is doomed. More
Katlyn is a member of a fae clan whose job is to stand the line between human and magical lands, a secret she has trouble hiding from her new human boyfriend even before she unexpectedly finds the fate of the world in her hands.

She isn't magically strong, and unlike other fae who understand all animals, she only caught birds and cats -- not a good combination. However, when she isn't able to reach other fae for help, Kat and her boyfriend frantically fight the enemy with the aid of a lazy tom cat, an African gray parrot who only speaks in verse, and a wise-cracking cockatiel with a bad attitude.

Kat Among the Pigeons Book Trailer
A short trailer for the book.

About the Series: Books Written during NaNoWriMo

I have taken part in NaNoWriMo for many years writing fast first drafts and then spending time afterwards editing. Here are a few of the novels I've written. I hope you enjoy them!

Reviews of Kat Among The Pigeons by Lazette Gifford

Wonderful story. Caught from first page and reread because so fun! Would love more stories about Kat, Cato and Galord. Oh, and the African Grey!! You are one of my fav "new" authors. Thanks for keeping it rated PG for us old - fashioned types.

This story caught me in the first chapter and didn't let go even when I finished it. Yes, I would LOVE more stories set in this world.

One disaster follows another after another and when you finish it, it is like sitting back after a really good meal.

The characters, especially the animals, are just wonderful and if I say any more about big wings I'll give too much away. Good read. Worth the money.

Kat Among the Pigeons is a whimsical tale of a Fae who knows her limitations and enjoys her simple life in an unimportant corner of the world where she maintains the border between Fae and the human world. She can talk only to birds and cats, a limitation no other Fae seems to share, and her inner pool of magic is quite small. However, when one thing after another goes wrong and the Fae world is too busy with events they think are more important, Kat figures out how to solve each and every problem with the help of her allies, both cats and birds of all shapes and sizes, and one lone human who gets thrust into magic against his will, but embraces it…along with Kat.

Now by that description, it might sound like the current trend in urban fantasy, but remember the word “whimsical.”
Is the world threatened by a disaster well beyond what the other Fae imagine she’s dealing with? Is she fending off magical creatures both large and small that are supposedly well beyond her ability?

It’s more how she’s doing it and how she remains blind to her own skills because of a lifetime of being patted on the shoulder as consolation for her limits that carries the story. She tries to put her life on hold, and that doesn’t work out so well. Kat doesn’t trust herself and comes up with explanations that, while plausible, are not the true ones.

Though at times Kat’s blindness seemed a little too strong, it fits with her character. She’s extremely clever, but only when pressed with her back to the wall. Kat downgrades her abilities and fails to recognize how skilled she has grown with avoiding the clash of technology and magic. She can see her cousin’s sloppy waste of magic, but not how much she has accomplished with fewer resources.

Blend that in with funny moments of Kat trying to keep David, the man she’s interested in, from discovering just what she’s able to do, and a hilarious byplay on a recorded tape between two birds that the humans cannot understand, but Kat can, and you have a fun read. It might not race from crisis to crisis, nor solve world hunger, but Kat Among the Pigeons gave me a good number of enjoyable hours.

This book won't disappoint. It's far better than some of the crap that's out there--both on the internet and traditional publishing. It's the kind of story I like--tasteful---no heavy-handed sex, language that would peel paint, or sado-masochism in this book. It's not all sweetness and light, either. A nice, old-fashioned tale told well. If that makes me old fashioned, I've been called worse. For $1.99, you get a darn good read.

(reviewed 56 days after purchase)
Sarah Nicolas reviewed on May 2, 2011

Overall, I thought the story held a lot of promise but the characters and writing style fell completely flat for me and I couldn't find a reason to care for anything other than the animal characters.

(reviewed 11 days after purchase)
CJ Cristtize reviewed on May 2, 2011

Wonderful tale. I was hook from the first page. The tom cat in this story is a personal favorite of mine.
the conflict in this tale was done perfectly and her struggle is one that I could easily identify with.

I found this book via a recommendation from another writer's blog, and I'm glad I followed the link! The byplay between Kat and her furred and feathered minions is even better than that between Kat and the humans (not surprising, considering the animals all know she is fae, and she has to conceal it from the humans). The conclusion felt a little rushed, and Kat's relationship with the Other World needs to be explored more, but I'm willing to wait for another book to do that. I have been ambivalent about e-books, but this one was good enough and at a good price point to make me reconsider.

It’s been such a long time since it was so easy to slip into the mind of the protagonist, which, to be perfectly honest, I thought I’d have a much harder time with, because I do usually identify with much darker and angst-ridden characters than Kat. She really hooked me with the banter and the way that Kat interacts within her world (both human and fae). I had no problem whatsoever delving deep into this world without too much world-building getting into the way of the story. Lazette Gifford doles out only what is necessary to understand and live in her world for the time, without bogging you down into the intense details that usually pull me out of a fae-based urban fantasy.

There’s enough movement in the plot that there really wasn’t a point that I felt that I could put down my Kindle with everything building to a point that you thought as the reader that you had figured everything out, only to be taken down a trail that you didn’t even realize was there just a chapter before. One of the “gotchas” that I think would have been a bit more of a shock had I not been quite as familiar with a dead poet with a penchant for birds (and no, while I’m sure you figured out the author, it’s not the poem that you’re thinking of). The pace was perfect in the story, and if there was one thing that I could say that left me a bit wanting was that I wanted just a bit more of an epilogue after the climax, seeing a more more of the “normalcy” that would have returned to Kat’s life after all was said and done.

I have read a lot of urban fantasy, and a few of them hooks me at the first attempt. This book managed. Oh my. This book is wonderful. It hooked me from the first line. It starts with a hint of trouble, and from there the trouble just grow. I loved that Kat didn’t have a lot of power, she used what she had in a wise way. The banter between Kat and her animal friends were hilarious. I liked the romance plot between Kat and the Photographer. And. Well. I liked everything with it actually!
It is a bargain at 1.99, better than many novel published by traditional publishers. The good part? She has a slew of other novels planned for this year.

You have subscribed to Smashwords Alerts new release notifications for Lazette Gifford.