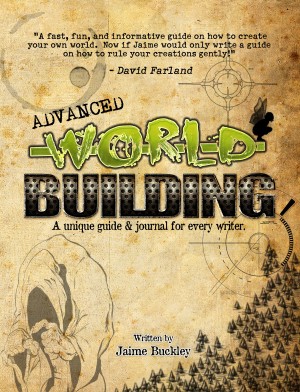 Advanced Worldbuilding: A unique guide & journal for every writer

By Jaime Buckley
Rated 5.00/5 based on 1 reviews
Advanced Worldbuilding is a unique guide that takes you by the hand and helps you understand the ‘why’ of worldbuilding. Written in the form of a conversation with a friend, taking you, step by step, through the process of creation with a focus on the end goal: To tell a great story.

Advanced Worldbuilding is a fantastic tool for any writer, regardless of skill level More
Every story requires worldbuilding.

What if there was a way to simplify the process of worldbuilding? A system that would open the door to your mind and create a constant flow of ideas?

Advanced Worldbuilding is a unique guide that takes you by the hand and helps you understand the ‘why’ of worldbuilding. Written in the form of a conversation with a friend, taking you, step by step, through the process of creation with a focus on the end goal: To tell a great story.

Advanced Worldbuilding provides you with the tools to craft your own “world journal,” and does so in a simple, straight forward way. Wanted Hero creator Jaime Buckley provides tips, templates and methods he uses to organize the notes you already have, while unveiling a system to develop whatever your heart desires. Create continents, races, governments, religions, technology, magic, plant & animal life—all with a check lists of what readers will be looking for.

Detailed examples of the Wanted Hero world are provided and used, to demonstrate how the author achieved his own results.

Transform your notes into a personalized “hub” of information, which can be added to at any time. The guide provides master copies of all templates for your personal use…or as examples for you to create your own.

Advanced Worldbuilding is a fantastic tool for any writer, regardless of skill level…and a critical addition to any worldbuilding arsenal.

Born May 27th, 1969 in Oakland California, Jaime Buckley has always aspired to be something more. Now at 364lbs he’s beginning to rethink his aspirations. Rumors say he’s a loving husband and father of 12 amazing kids…but you know how rumors get started. He dreams of a career as a Pepsi connoisseur. Heck, he’d even settle for being a cheese maker, sausage taster or anything else that might prevent global warming by eating animals. Hey, we all have to do our part.

Instead Jaime labors from dawn until dusk building worlds, crafting magic, translating ancient alien text, training heroes, fighting monsters and trying to figure out Twitter. Though there are some days when he feels like giving it all up to become a handsome billionaire, he stays the course, entertaining children around the world.

That’s what matters most to Jaime Buckley: the youth.

With a long history of odd jobs, from theatre usher to bodyguard, substitute teacher to a six-figure financial rep, nothing hits home stronger than being a storyteller. His own rough youth experiences gave Jaime an eye for troubled souls, who always find a compassionate heart and unyielding perspective in the Indie author. A self-taught cartoonist, publisher, web designer and Fiver TOP RATED SELLER (Illustrator), this comical grandfather sought a way to uplift and encourage youth through comic books in 2004. With a handful of library books, Jaime created his first website and sold his .PDF creations for $0.97 each.

In 2009 Jaime was encouraged to convert his comics into novels. Nearly a year later he published his first book: PRELUDE TO A HERO

Seeing the positive influence his stories continued to have on others, the family made a plan. Work. Focus. Endure. Create.

“If we’re going to struggle and suffer,” stated his wife Kathilynn, “then we want to struggle for something we all believe in.”

Today the family resides in Utah, where Jaime rises at 3am each morning to write and bring their united dream to fruition. When he’s not working multiple jobs Jaime also designs games and teaches worldbuilding through his daily blog. He’s too fat to learn ballet and the only instrument he plays is the radio, but he is taking classes to learn the kazoo. He still sucks at it, but he’s hopeful.

Until then, he continues to build wantedhero.com, where kids come to play and enjoy the ever-growing fun wrapped around the comical storyline of the Hero by accident.

I don't know exactly what I was expecting when I tracked down this book, but I think I might owe Jaime a life debt.

As early as the dedication the book draws you in, it makes you feel at home and safe to explore. To draw from (what the book says is) the very branding of Jaime's Wanted Hero: it lets you know that "you are more than you think you are."

Coming into this I was getting an inexpensive e-book to try to spark ideas for a new world and abandon the characters I started getting to know back in 2004 because I was at the end of my rope trying to tell a story they could shine in. But it was just so darn engaging. I only got it earlier today and I've just finished "the event." I know what happens last in the first book and how it's setting up the next.

I have an ending. I have a trail I can actually follow. I didn't think ot was possible to write a guidebook so engaging it's as hard to put down as a great story, but here it is... Wow

You have subscribed to alerts for Jaime Buckley.

You have been added to Jaime Buckley's favorite list.

You can also sign-up to receive email notifications whenever Jaime Buckley releases a new book.