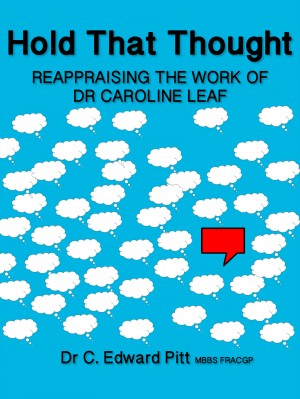 Hold That Thought Reappraising The Work of Dr Caroline Leaf

By Dr C. Edward Pitt
Does negative thinking make us sick? Does positive thinking improve our health and well-being? The popular Christian author, Dr Caroline Leaf, thinks so. Modern science disagrees. With 20 years experience in clinical medicine, & backed up by 300 current scientific references, Dr Pitt highlights the current science on thought & stress, & provides a new perspective on Dr Leafs writing and teaching. More
Think you know what thought is? What about stress? Does positive thinking improve our health, our wealth, our well-being?

Dr Caroline Leaf, a prolific and popular Christian author, teaches that “75 to 98 percent of mental, physical, and behavioural illness comes from ones thought life”, that “stress is a direct result of toxic thinking”, and “we have two choices, we can let our thoughts become toxic and poisonous or we can detox our negative thoughts which will improve our emotional wholeness and even recover our physical health.”

Dr C. Edward Pitt MBBS FRACGP is a full time GP* and spare-time writer. He lives and works in the northern suburbs of Brisbane, Queensland, Australia.

He has been studying and working in the medical profession since 1992. He spent a number of years in hospital paediatrics before getting sick of shift-work and moving into general practice.

Since attaining his GP Fellowship in 2005, he has gained experience in many and varied areas of medicine including Skin Cancer Medicine, Cosmetic Medicine, Aged Care, and Sexual Health & Family Planning. He acts as an independent medico-legal expert in the field of general practice, and serves in executive positions on a number of national and state level boards for the Royal Australian College of General Practitioners.

His written work has been broadly published in a number of different spheres. In the early 2000’s, he was a regular writer for the national Christian magazine, “Alive”. He published his first book in 2009, “Stress Out”, now in its second edition. In 2013, he published "Hold That Thought: Reappraising The Work of Dr Caroline Leaf", and in 2015, he published "Fats and Figures", a short book on heart health. In early 2016 his article, "Cutting through the Paleo hype: The evidence for the Palaeolithic diet” was published by the peer reviewed medical journal Australian Family Physician.

He is a husband, father to two rambunctious boys, coffee connoisseur, amateur actor and a terrible dancer.
Whatever time he has left, he usually wastes it on Facebook or Angry Birds!

(* GP is short for General Practitioner, also known as a Family Physician in some parts of the world)

You have subscribed to alerts for Dr C. Edward Pitt.

Would you like to favorite Dr C. Edward Pitt?

You have been added to Dr C. Edward Pitt's favorite list.