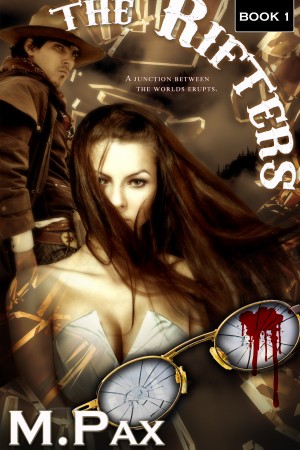 Starting over is hard to do. In current day New York, Daelin Long’s dream job at a publishing house goes the way of the dinosaurs her sister chases. With no money and nowhere else to go, Daelin accepts the librarian position in her sister’s dinky town in the middle of Oregon. Nestled inside ancient volcanic peaks, the town of Settler holds onto many secrets. Residents roam the streets with weirdly fashioned devices, and odd lights pulse in the night skies. People whisper of a phantom outlaw and start dying, murdered and missing their heads. On top of it all, Daelin’s sister is missing, and Daelin doesn’t know who to trust.

Also in Series: The Rifters

Reviews of The Rifters by M. Pax

I've always found Mary's writing to be imaginative and The Rifters was no exception mixing the modern world with the wild west and a portal to somewhere and sometime with beings we have yet to fully understand battling over it or maybe because of it. This is where Darlin Dae Long arrives to stay with her sister and is unceremoniously dumped into the middle of the chaos as a murder spree occurs, the suspect seemingly a nice guy but with secrets and lets not forget the ghost of a hung 1880's stagecoach robber, yes you're gonna get an awful lot going on in this story.
The Rifters is the first novel in the series, it's sequel is out very soon and I'm looking forward to reading that as well because while it took me a little way to figure out what was going on once it clicks this is a fast paced action filled story.

It's not easy starting over. Not for Daelin Long who lost her dream job in NYC and has to go to her sister's house in the tiny Oregon town of Settler. Nor is it for Earl Blacke who was a famed outlaw in 1888 but now a cowboy atoning for his sins in modern day Settler. It doesn't help that Daelin's sister is missing and there's rumors of phantoms and missing heads. Earl must keep his secrets, but to save Daelin and Settler, he'll have to risk something more.

An incredibly original tale of brave small town folks, cowboys, and monsters. It's urban fantasy, science-fiction, and steampunk wrapped within an action-packed plot and a quirky cast of characters. Settler has a small town flair, but something even more unusual stretching back through its history. The place itself is a fascinating character itself!

Daelin won me over quickly. She lost everything in NYC, and when she came to her sister Charming's home, Charming had gone missing. Thrust into a strange little town away from everything she worked for, Daelin is forced to fight for her life against things she doesn't understand. She's smart and brave, but there is a bookish innocence about her that I adored. Earl is like a knight in dusty cowboy boots. I could feel the weight of his secrets and I wondered if he could remain true to them. There was something I liked about everyone in Settler, and many times, I found myself giggling as I read. The threat looming over the town is a mystery, but no less deadly.

This is the first book in the series, and I can't wait to read more to answer the thousand questions bumping around in my head! I highly recommend THE RIFTERS to everyone.

Moving to Settler, Oregon may be more than Darlin Dae "Daelin" Long bargained for in M. Pax's The Rifters. This short novel hooked me from the first chapter. The action moved fast paced, and the mysteries never ceased. Daelin was easily one of my favorite characters with her quirky expressions, such as "in all the dictionaries," to the fact she was taking the town's library job. As a librarian, I have a soft spot for them in books. Earl was rough around the edges, and his enigmatic ways kept me a tiny bit distanced from him. The town of Settler is unlike any town I've encountered, and I loved the world Pax has created. Part-fantasy, part-science fiction, part-steampunk yet completely enthralling, The Rifters by M. Pax is the start of a great new series.

You have subscribed to alerts for M. Pax.