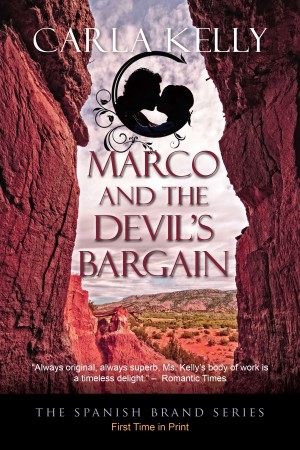 Marco and the Devil's Bargain

By Carla Kelly
At the end of the 18th Century, during the decline of the Spanish Empire in the New World, Marco and his wife Paloma fight the scourge of smallpox by bravely venturing onto the Staked Plains, stronghold of the Comanche. As part of a devil’s bargain, they must put themselves at the mercy of these dangerous enemies and try to inoculate them. Book 2 of the Spanish Brand Series. More
The year is 1782. Marco Mondragón, brand inspector in Spanish New Mexico, and his wife Paloma Vega have settled happily into married life on the Double Cross. And yet Paloma is convinced their joy will not be complete until she has a child. She longs to give her husband a baby to soothe his grief over the death from cholera of his first wife and twin sons. Marco’s land grant stands at the edge of the most dangerous region in the Southwest: Comanchería. Both Paloma and Marco have suffered at the hands of the fierce Comanche, losing beloved family members in raids. Despite their fear and mistrust of the Comanche, one lives among them. Paloma rescued Toshua from slavery and near death. As much as she respects the man now, Paloma wishes he would return to the Staked Plains, Comanche stronghold to the east in Texas. No one knows why Toshua remains at the Double Cross. Is it because his own tribe shunned him, or is he genuinely attached to its owners? Now a new enemy threatens the Mondragóns’ domestic bliss: the Dark Wind—la viruela, smallpox—barreling down on the defenseless royal colony from Comanchería. A mysterious and arrogant English physician named Anthony Gill offers their one hope at salvation … but only if Marco agrees to his Devil’s Bargain. Book Two in the Spanish Brand series, which began with The Double Cross.
Available ebook formats: epub mobi pdf rtf lrf pdb txt html
First 20% Sample: epub mobi (Kindle) lrf more Online Reader
pdb
Price: $6.95 USD
Buy Add to Library Give as a Gift
How gifting works
Create Widget
Tags: new mexico comanche smallpox 1782 spanish colony
About Carla Kelly

A well-known veteran of the romance writing field, Carla Kelly is the author of thirty-one novels and three non-fiction works, as well as numerous short stories and articles for various publications. She is the recipient of two RITA Awards from Romance Writers of America for Best Regency of the Year; two Spur Awards from Western Writers of America; two Whitney Awards, 2011 and 2012; and a Lifetime Achievement Award from Romantic Times. Carla’s interest in historical fiction is a result of her lifelong study of history. She has a BA in Latin American History from Brigham Young University and an MA in Indian Wars History from University of Louisiana-Monroe. She’s held a variety of jobs, including public relations work for major hospitals and hospices, feature writer and columnist for a North Dakota daily newspaper, and ranger in the National Park Service (her favorite job) at Fort Laramie National Historic Site and Fort Union Trading Post National Historic Site. She has worked for the North Dakota Historical Society as a contract researcher. Interest in the Napoleonic Wars at sea led to a recent series of novels about the British Channel Fleet during that conflict. Of late, Carla has written two novels set in southeast Wyoming in 1910 that focus on her Mormon background and her interest in ranching.

Reviews of Marco and the Devil's Bargain by Carla Kelly

You have subscribed to alerts for Carla Kelly.

You have been added to Carla Kelly's favorite list.

You can also sign-up to receive email notifications whenever Carla Kelly releases a new book.