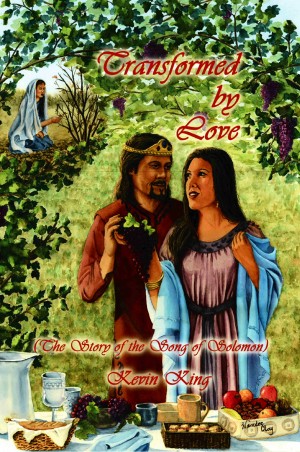 Transformed by Love (The Story of the Song of Solomon)

By Kevin King
Many find Solomon’s Song a ‘hard read:’ but this book follows the storyline to show how, through heart-searching highs and lows, he lifts this unknown woman from despair to royal splendour.

You will also learn why this vision of the ‘shepherd king’ led to Solomon’s own downfall: and yet how perfectly it reveals what the love of Jesus, the true ‘Good Shepherd’ and ‘King of Love,’ can do for you. More
King Solomon, the wisest man who ever lived, called this his 'Song of Songs.' But through the centuries many have struggled to make sense of it. Who is the mysterious woman with whom the king is so in love? What is her story - and why is it in the Bible?

In this devotional exposition and modern English translation, we follow the heart-searching highs and lows of their relationship as we unravel the answers to these questions. We see how lovingly and patiently Solomon wins her heart and confidence until finally, freed from her past, she becomes the magnificent queen that he first saw her to be.

But what of Solomon himself? He is not what we would expect: at heart a shepherd, an adventurer, a lover of wild, open spaces. And as the story progresses we come to understand the prophetic significance of Solomon's vision of the 'shepherd king' - and why his attempts to fulfill it himself caused his downfall. Yet, more importantly, we see how perfectly it is fulfilled, and all out deepest needs met, in the ultimate 'Good Shepherd' and 'King of Love,' Jesus Christ.

I was born and raised in Surrey, England, where I also married and settled after meeting my wife at Uni in Manchester. I love wild animals and wild places; and one of my greatest delights was to spend 9 years living in the Shetland Isles before we came back south to the Yorkshire Dales.

I am a scientist by training and was a computer programmer and technical author by trade. But since my first encounter, at the age of 14, Jesus has been the greatest love of my life. (And I know my wife won't mind me saying so, because He is hers too!)

I have now been a church leader and Bible teacher for about 50 years and a frequent visitor to churches and Bible schools in various parts of the world. Following my second most life-changing encounter with God, back in 2003, I began studying - and later teaching on - the Song of Solomon, which quickly became my most-requested subject. The first draft of 'Transformed by Love' was completed in 2004 and has undergone various minor revisions since: but it was not until 2012 that I finally took the decision to publish in paperback and on-line format. My desire in doing so is to make the message of this book available as freely as possible to those who may need it.

Over the years I have been an avid reader; so much so that my son once joked, 'What do you call Daddy when he's reading a book? ... Anything you like: he can't hear you!' Next to spiritual themes, science fiction and fantasy, adventure and extreme survival have been my favourite genres.

Will there be more books? Yes, probably. But I do not want to write for the sake of writing, or to see my name in print: rather, when I sense that God is giving me something He wants me write about. I am working on another project which could lead to one or more books in due course. I also have another, much bigger, subject in mind: but I am still in 'learn' mode on that one. I believe that, in spiritual matters, a message must become part of you before you can truly share it.

In the meantime, please keep in touch by following my blog, where I am posting occasional articles and news updates.

You have subscribed to alerts for Kevin King.

You have been added to Kevin King's favorite list.

You can also sign-up to receive email notifications whenever Kevin King releases a new book.