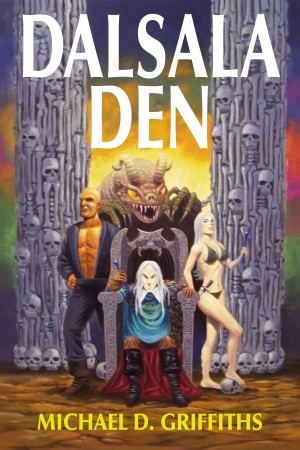 Confused and alone, Matt takes it upon himself to hunt down her brutal slayer, but quickly discovers that this man is no ordinary serial killer, but could in fact be a threat to the entire planet. Can an alarm installer, working on his own, somehow stop the largest threat that has ever faced his country or perhaps even his world? Matt Narrows will need to become more than just a hero if he is going to have any hope of stopping the horror that is Dalsala Den.
Available ebook formats: epub mobi pdf rtf lrf pdb txt html
First 20% Sample: epub mobi (Kindle) lrf more Online Reader
pdb
Price: $4.99 USD
Buy Add to Library Give as a Gift
How gifting works
Create Widget
Tags: urban fantasy fantasy speculative fiction dark fantasy dalsala den matt narrows michael d griffiths
About Michael D Griffiths

Michael D. Griffiths is a man who likes to keep busy. He loves camping in the wilds of Arizona and all over the west, playing poker, and debating such topics as mysticism, creativity, anarchy, and punk rock.

He was awarded first place in Withersin’s 666 writer’s contest and has been published in over twenty anthologies. He has become the Marketing Manager for Abandoned Towers. He is on the staff of The Daily Discord, Innsmouth Free Press, and The Noise magazines. His Skinjumper Series has been chronicled in M-Brane magazine and has now been released in a new novel. The Living Dead Press has published his series, The Chronicles of Jack Primus and Eternal Aftermath. The first novel in his Warriors of Light series, Dalsala Den, has recently been released by Cyberwizard Publications.

You have subscribed to alerts for Michael D Griffiths.

You have been added to Michael D Griffiths's favorite list.

You can also sign-up to receive email notifications whenever Michael D Griffiths releases a new book.