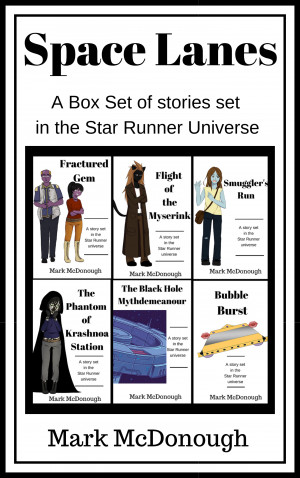 By Mark McDonough
Here for the first time are all six short stories set in the Star Runner Universe contained in the one volume.
1 - The Flight of the Myserink; 2 - The Phantom of Krashnoa Station; 3 - Fractured Gem; 4 - Smuggler's Run; 5 - The Black Hole Mythdemeanour; and 6 - Bubble Burst. More
Here for the first time are all six stories set in the Star Runner Universe.
The Flight of the Myserink – Tran’s a smuggler and a thief, but the chance to transport a dozen mysterious containers may just change his life forever.
The Phantom of Krashnoa Station – When the space ship that Danal’s travelling on is boarded, seized and made a part of a bizarre space station, she has to wonder if she can ever escape.
Fractured Gem – An unexpected meteor storm forces Holas and Zheen to land on a strange planet. Now their life in space may have just been lost.
Smuggler’s Run – When Sfolan is marooned on the planet Dramazan, he has no idea if he can even survive, let alone ever get back into space again.
The Black Hole Mythdemeanour – After Alexander, Pete and Nick are lost through the black hole, Alana Perry is left as the only one who thinks that they just might not be dead.
Bubble Burst – Star Runner’s Gheyzhimum crew are captured by a strange Bubble of space that has left them powerless. Is there any hope for escape?

Mark McDonough has lived his whole life in Queensland, Australia. After growing up in Ipswich, he lived for a short time in Brisbane while attending University. Work then took him to Far North Queensland for a number of years before he moved to his current home of Toowoomba.

For as long as Mark can remember, there have been characters clamouring to have their stories told – everything from the depths of time when dinosaurs ruled the Earth through to the vast reaches of space where only the bravest spaceships dare to fly and everywhere in between. Most were written in secret until, one day, those characters demanded that their tales be spread far and wide. Thus, was born Stargon Books.

When he’s not sitting with laptop or notebook in hand, he can be found at work, with his family or out on the football field where he not only plays but also referees and Coordinates an entire competition.

Ultimately, Mark dreams of the day when he can write full time but until then, as he says, “I’m a wordsmith, it’s who I am; if I didn’t write, I wouldn’t be me”.

You have subscribed to alerts for Mark McDonough.

You have been added to Mark McDonough's favorite list.

You can also sign-up to receive email notifications whenever Mark McDonough releases a new book.