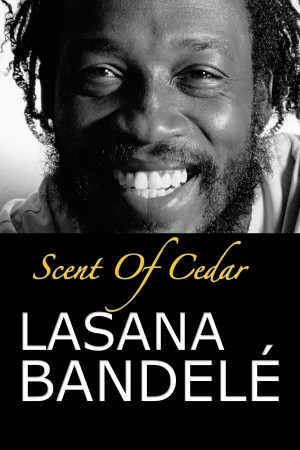 About Lasana Bandelé
A Jamaican Poet, Reggae World Folk Recording/Performing Artist Deep In His African Roots With A Big Voice And A Powerful Message.

When Lasana performed at his first Reggae Sunsplash festival in 1990, he already had one hit single behind his name. The audience quickly came alive to the sounds of "Living In Shacks." The Storitela, who had already been making waves locally, was now reaching a larger audience.
Says Dermott Hussey, Music Journalist/presenter at The Joint – SiriusXM Satellite Radio, "Lasana Bandelé is an original whose words and music succeeds beautifully because it is what exciting music does best, it surprises us with the delightful discovery of places where we have never been … "
In 1992 the Jamaican Broadcasting Corporation filmed and aired a one-hour television special on Bandelé, highlighting his music and poetry. In June of the same year he performed at City Stages, a major festival in Birmingham, Alabama, and was voted Best Reggae Act. He also performed at The Chucker and the Birmingham Arts Association where he held a Poetry & Songwriter Workshop.

Bandelé's music and poetry was warmly received in San Francisco. He was a featured poet at several poetry cafés, and worked in association with the San Francisco Public Library to provide a series of concerts, poetry readings for the public. Back in Jamaica in 1994, he released the single "All The Brothers And Sisters Are One" and delighted the audience in his third Sunsplash performance. 1996 highlights his first entry into the Billboard Chart with "Cassidy" on the "Fire On The Mountain" various Artist CD 'Reggae Celebrates Grateful Dead.’ In 2004 he re-released "Storitela" album which was previous released on vinyl featuring other hit songs including “Big City”, Col’ War”, “Subway Blues”, “Waiting Inside”. In 2005 he recorded the wonderful "Don't Wait" written and produced by Grammy winning artist and producer Ray Contreras of Racy Music on the In Memory Of .... various artists CD. 2011 have seen the release of "Love On The Freeway", pre-release from the upcoming CD and his newest single, a classic cover of Bob Dylan’s “Blowin’ in The Wind” on his Storitela Music.

In person, this quiet, centered artist radiates warmth and the rhythm of his poetry. His persona easily translates when he performs live, whether at major festivals or in smaller, more intimate gatherings such as clubs and theaters.

You have subscribed to alerts for Lasana Bandel&eacute;.

You have been added to Lasana Bandel&eacute;'s favorite list.

You can also sign-up to receive email notifications whenever Lasana Bandel&eacute; releases a new book.