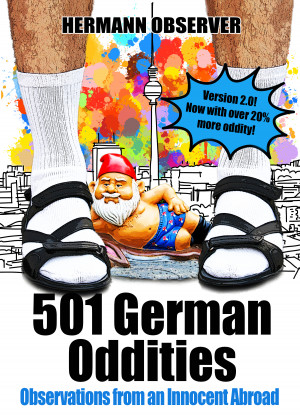 By Hermann Observer
Rated 3.00/5 based on 1 reviews
Sure, you may have thought you already knew everything there was to know about Germany and the Germans. After all, every school kid knows that Germany is the land of circulatory disorders, Turkish döner kebab, naked sledding competitions and David Hasselhoff. But Germany is more than that. Much more. More
Do you often feel the uncontrollable urge to drive at ridiculously high speeds when out on the freeway? Does that constant, nagging struggle between the opposing sides of your inferiority-superiority complex keep you up at night? Are you brutally direct, painfully precise and sometimes feel like you’re speaking a foreign language because no one seems to understand you? Vorsicht (watch out)! You might be German. In that case you won’t have any use for this book. Have a nice day.

If, on the other hand, you have always been puzzled by odd German Attitudes, Behavior or Cultural practices, then this is the book for you. You are not alone, you see. Nor is there anything wrong with you reacting that way. Your puzzlement is a perfectly healthy and normal human response to the cognitive dissonance and other psychological disrruptions that often dissonate and disrupt when foreigners make unprotected contact with high-grade Germanness. Or at least that’s what a specialist in Vienna told me.

As Winston Churchill once said, “Germany is a riddle wrapped in a mystery inside an enigma.” Actually, he said Russia when he said that but I’m pretty sure he meant Germany. He was Winston Churchill, after all, and he had been around a bit. I certainly would have said Germany. And I wouldn’t, much less couldn’t have said it better myself. Germany and the Germans are indeed enigmatic and, well, really weird sometimes. This collection of random personal observations and unsolicited opinion is an attempt to document just that. I cannot guarantee that this list of German oddities is complete, of course. I can assure you, however, that enjoying these oddities in the privacy of your own home is a relatively safe and effective way to partake in the German experience without any of the harmful side effects. Viel Glück dabei (and good luck with that).

Dazed and confused about Germany in general and Berlin in particular, Hermann Observer (aka Clarsonimus Maximus) is a mean, angry, cynical and nasty old expatriate American [place favorite expletive here] who observes the world around him in quiet desperation.

The book is more than five hundred observations about Germany, its people and culture. I was lucky enough to receive a copy of 501 German Oddities By Hermann Observer for free from a Smashwords coupon code. This is just my honest thoughts on it.

It was an amusing book and I appreciated the author's outlook on the country. Many of the oddities were of interest to me.

However, there were a few problems for me. These are mostly just my opinion. In some portions, the comments are poorly worded and don't always make sense. Furthermore, in some areas, the author uses German words in such a manner that it makes the sentence unreadable to me; as I don't speak German or understand many of the words. Many of these oddities don't seem to be factual; a lot of them are more based on the author's opinion. I don't know how true many of them are, admittedly. However, some are completely silly with others being kind of not true. The "Germany is also the only country" oddities are an example of this and they seem to be quite unfactual, just based on what I know of Germany and the rest of the world.

In some ways, the book can also get repetitive; many of the oddities are mentioned over and over again. The author keeps on making mention to a hypothetical pair of the "Last Germans on Earth" and keeps on make comments about the weird German behaviour and how they would not get along. Another couple of these scenarios are that "a real German will always/ never", "fun German games you didn't know you were participating in..." or "Germany is also the only country on Earth that will..." In some cases, these observations are useless because the author later makes observations that render the former invalid (saying one thing for certain and then the complete opposite later). Other things that get repeated, quite regularly: Germans not being able to form a line (apparently), recycling old bottles, that Germans drive like they're constantly in a race (apparently), problems with public transport, and various mafia-like conspiracies that control various aspects of their lives... The chapters of the book don't really make sense to me and the facts don't have any real order. I think it's kind of deliberately like that because putting them in a proper order might disclose the repetition of these oddities, rendering them useless.

The book was a little one note in some areas and kind of droned on sometimes. However, the overall book was quite alright. I liked it, for the most part, and I did appreciate that the author took the time to write down their thoughts... Even if portions of it got repeated several times over.

You have subscribed to alerts for Hermann Observer.

You have been added to Hermann Observer's favorite list.

You can also sign-up to receive email notifications whenever Hermann Observer releases a new book.