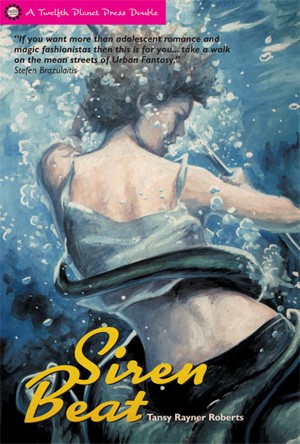 Rated 3.50/5 based on 2 reviews
In “Siren Beat”, a minor group of man-eating sirens on the docks of Hobart would not normally pose much of a challenge for Nancy, but she is distracted by the reappearance of Nick Cadmus, the man she blames for her sister’s death.
Sirens and mermaids tend to be bitter. You can’t blame them, really. Their tales don’t tend to have happy endings.

Tansy Rayner Roberts lives in Tasmania with her partner and two daughters. She has a PhD in Classics and runs a small family business from home, selling the Deepings Dolls. Tansy blogs at http://cassiphone.livejournal.com and with a group of other wonderful Australian writers at http://ripping-ozzie-reads.blogspot.com. She can be found on Twitter and Facebook as tansyrr.
Power and Majesty, the first book of Tansy's Creature Court fantasy trilogy featuring flappers, shapechangers and bloodthirsty court politics, will be released from HarperCollins Voyager in June 2010.

This paranormal romance is a quick, entertaining read but I found myself wishing for a bit more depth.

Given that this is a novella length work though, there is a good sense of a world which can contain sirens and guardians.

The male lead Chadmus performs a very Mills and Boon hero role, and I wish he were less cardboard cutout. More exploration of his nature as a selkie and grief would have fleshed him out a bit.

As a strong female character, I would also have liked to learn more about who the Guardian Nancy is.

All in all everything wrapped up a little too easily for my liking but I can see that there is more for the author to explore in this world.

If you are after a quick read with a little bit of fun, then this is the novella for you.

(reviewed 28 days after purchase)
seandblogonaut reviewed on on Nov. 29, 2010

Siren Beat is a little bundle of joy.

At least that's how I felt when I dipped into this novelette from Tasmanian author Tansy Rayner Roberts.

I was on a break from reviewing a particularly difficult to read ARC (which I suspect was self published). Before I realised it, two hours had flown by. I 'd finished the story, annoyed and distracted my wife with entertaining snippets and been left wanting more.

Enter Nancy Napoleon
Nancy is a guardian. She guards the Hobart docks from those that dwell in the deep, creatures that would lure humans to the deaths for fun or even more clandestine purposes.

Some Siren's are on shore leave and they are causing problems, dead body problems, the kind of problems, that only Nancy can deal with. She's getting over the death of her sister, the sisters ex boyfriend, who is also a Kelpie(in the folk lore sense, not a cattle dog) and coming to terms with her partially crippled body.

Genre?
This is Urban fantasy with an Aussie flavour. It's good Urban Fantasy as well. Nancy Napoleon is no wilting flower, neither is she one of those glamorous airheads that miraculously transform themselves into demon fighting, vampire killing femme fatales only to fall in love with strong silent cardboard cut out male eye candy.

There's some strong language as well as a couple of very saucy patches, that make this a very funny, memorable and adult piece of fiction. It reminded me of the Dresden Files, only I think I like Nancy as character more than Harry Dresden.

Verdict
This is the best piece of short fiction I have read in a long while. It picked up the WSFA Small Press Award for 2010 at Capclave in October this year(confirming my impeccable taste). It's punchy, funny and leaves me with a taste for more.

Luckily...
Tansy secured a grant from the Australia Council to write the first full length Nancy Napoleon novel. Called Fury, it will hopefully be out in early 2012.

Where can I get it?
At $1.99 US for the ebook version through Smashwords makes a nice little ePresent for yourself or someone else. Kudos to Twelfth Planet Press for making the title available in multiple formats too.

It was originally released with Road Kill by Robert Shearman in tête-bêche format by Twelfth Planet Press as the first of their doubles collection. Go here if you would like to purchase it in printed form.

You have subscribed to alerts for Tansy Rayner Roberts.

You have been added to Tansy Rayner Roberts's favorite list.

You can also sign-up to receive email notifications whenever Tansy Rayner Roberts releases a new book.