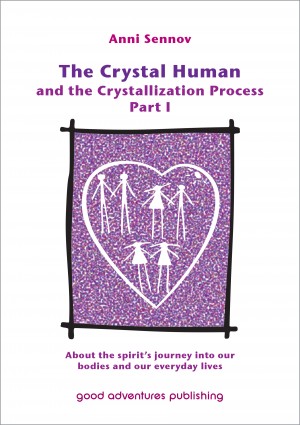 The Crystal Human Being and the Crystallization Process Part I: About the Spirit's Journey into Our Bodies and Our Everyday Lives

By Anni Sennov
“Anni presents a wealth of insight and information on the Crystallization Process and how it can potentially impact us on the journey to becoming fully fledged Crystal Humans. Reviewing these two books triggered my own crystallisation journey, and fortunately the relevant guidance was to hand as I worked my way through the books”.

Anni Sennov is the woman behind AuraTransformation™, which is a powerful method for expanding your consciousness.

She is also the founder of the Aura Mediator Courses™ which take place in different countries, mainly in Europe.

Anni Sennov is a clairvoyant advisor, international lecturer and the author of more than 20 books about energy, consciousness and self-development, as well as New Time children and relationships, several of which have been translated from Danish into a number of languages.

Together with her husband Carsten Sennov, she is a partner in the publishing company Good Adventures Publishing and the management consulting and coaching company SennovPartners, where she is a consultant in the fields of personal development, energy and consciousness.

Anni and Carsten Sennov have developed the personality type indicator four element profile™ that consists of four main energies corresponding to the four elements of Fire, Water, Earth and Air, which are each present in everyone in a variety of combinations of balance and strength. Multiple courses are offered on how to understand and integrate these elements both for private people as well as businesses.

Anni Sennov was born in Denmark in 1962 and originally began her career in the financial world. Since 1993 she has had her own practice of personal counselling and her great strength is her ability to clairvoyantly perceive multiple relevant circumstances pertaining to her clients’ personality and consciousness. She has a very direct approach and consciously provokes her clients in order for them to open up their eyes to various interesting contexts in life.

In 1996, after several years of serious illness and years of intense work with New Age Energies, she gained access to consciousness-wise knowledge of the New Time Energy and the future human aura structure, which no one else was familiar with in Scandinavia at the time. This was the dawn of a new controversial trend of having your aura transformed to match the New Time Energy through an AuraTransformation™.

Anni Sennov’s work and books are mentioned in numerous magazines, newspapers and have featured on radio and television in many countries, both in and outside of Europe.

On www.annisennov.com you can subscribe to her newsletter, and blog and see her travel schedule and event calendar.

You have subscribed to alerts for Anni Sennov.

You have been added to Anni Sennov's favorite list.

You can also sign-up to receive email notifications whenever Anni Sennov releases a new book.