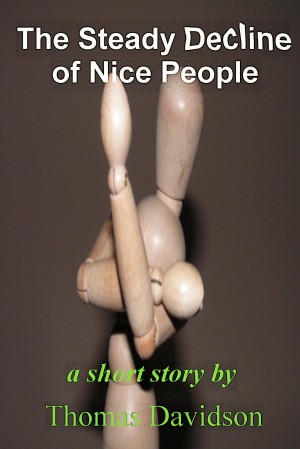 The Steady Decline of Nice People

Thomas Davidson's PAST IS PRESENT won two 2016 Killer Nashville Silver Falchion Awards. He is also the author of THE MUSEUM OF SUDDEN DISAPPEARANCES, featuring Jurassic Jim Fleetwood. EXIT, a near-future thriller, is loosely based on his short story, "Exit," winner of San Francisco's 2013 Litquake Booktrack Halloween Short Story Competition. His nonfiction has appeared in the Boston Phoenix. He's been tracked by surveillance cameras in the Boston area.

The Steady Decline of Nice People (micro video)
THE STEADY DECLINE OF NICE PEOPLE first appeared on Booktrack, with music and sound effects, as The Vampire's Chauffeur. This video is a short excerpt from the Booktrack version. The print version, which is free, contains screamingly fantastic pictures and illustrations.

Reviews of The Steady Decline of Nice People by Thomas Davidson

You have subscribed to Smashwords Alerts new release notifications for Thomas Davidson.

You have been added to Thomas Davidson's favorite list.

You can also sign-up to receive email notifications whenever Thomas Davidson releases a new book.