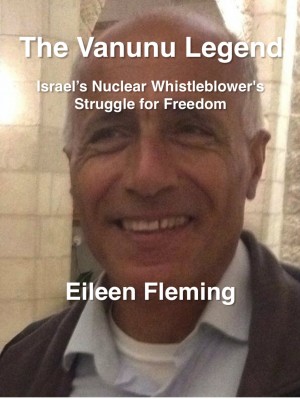 By Eileen Fleming
Rated 5.00/5 based on 4 reviews
Israel’s Nuclear Whistleblower, Mordechai Vanunu was 'freed' from 18 years behind bars on 21 April 2004 to open air captivity under draconian restrictions and 24/7 surveillance. The Vanunu Legend continues the saga the author began documenting in 2005, after meeting Vanunu in east Jerusalem on her first of eight investigative trips to both sides of The Wall in the Holy Land. More
The Vanunu Legend documents the ongoing saga of Israel's Nuclear Whistleblower, Mordechai Vanunu in his tenth year of struggle through the Supreme Court for his right to leave Israel since he was freed from 18 years behind bars on 21 April 2004 up until September 2014:

Because Vanunu's saga has continued "Heroes, Muses and the Saga of Mordechai Vanunu" was published in September 2015 which UPDATES this story and includes Vanunu's breaking news:
http://www.amazon.com/dp/B014I7MN1O

In 1986, Vanunu was convicted of treason and espionage after being kidnapped by Mossad in Rome for providing London's Sunday Times two-rolls of photographic proof and telling all the truth he knew as a mid-level technician on the night shift within Israel's 7-story underground WMD Facility in the Negev.

The events of September 11, 2001 compelled New York born Eileen Fleming to research for her first historical novel and journey to both sides of The Wall in Israel Palestine. While in Jerusalem in 2005, Eileen met Israel's Nuclear Whistle Blower, Mordechai Vanunu and became a Reporter, Producer of "30 Minutes with Vanunu" and founder of WeAreWideAwake.org

Eileen's fifth book, "The Vanunu Legend" documents Vanunu's ongoing struggle for his right to leave Israel in the years since her third book "Beyond Nuclear: Mordechai Vanunu's FREEDOM of SPEECH Trial and My Life as a Muckraker 2005-2010" was published.

Because Vanunu's Saga has continued since this publication, Fleming published "Heroes, Muses and the Saga of Mordechai Vanunu (My Life as a Muckraker Book 2)" to set the record straight since "The Vanunu Legend" was published for history's sake:
http://www.amazon.com/dp/B014I7MN1O


From 2010 until April 2015, Eileen had been the lone administrator of Free Vanunu at Facebook and TNT/Telling Nuclear Truths until Vanunu assumed responsibility:
http://thearabdailynews.com/2015/04/02/resurrection-of-mordechai-vanunu-ends-the-legend-of-vanunu/

In 2012, Eileen ran for US House of Representatives District 5, in Fl. and in 2014 she became the first non-Arab correspondent for the US based The Arab Daily News:
http://thearabdailynews.com/author/eileen-fleming/

USA politicians should fear a well informed public. "The Vanunu Legend" informs well and should be required reading for USA reporters and pundits.

CHEERS for this book which documents Israel American government and media cooperation in trying to silence Israel's nuclear whistle blower Mordechai Vanunu who has paid his dues and more for telling the truth 28 years ago about Israel's weapons of mass destruction.

There is always more we can do to help Mordechai Vanunu leave Israel. He has paid his dues, after all. Eileen Fleming once again brilliantly defines Vanunu's quest for truth and freedom in "The Vanunu Legend". This is a must-read for everyone interested in the saga of this intrepid whistleblower...

Entertaining read of fascinating topic world media and politicians have ignored for too long.

You have subscribed to alerts for Eileen Fleming.

You have been added to Eileen Fleming's favorite list.

You can also sign-up to receive email notifications whenever Eileen Fleming releases a new book.