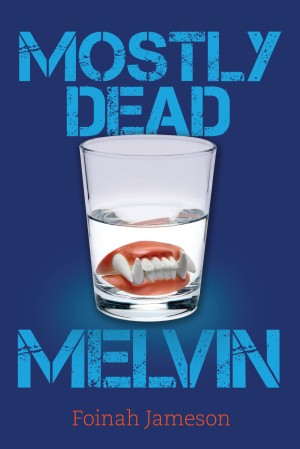 Melvin Morton dreams of becoming a vampire, but when he accidentally gets his un-death, it’s not what he expects. Hollywood Lied. Melvin's un-life, while running from a shadow demon and a goblin horde, is worth living when aided by a ghostly guide, his psychotic best friend, and a voodoo priestess. Set in Portland, Oregon, Mostly Dead Melvin is a pop culture satire of the modern vampire mythos. More
Life dies and then you suck.... Kind of.

Melvin Morton loves vampires – the beauty, the power, the pop culture awesome of it all, and knows that his boring, lonely life as a night security guard in a mall would be so much better if only vampires were real.
That changes when a strange, pale girl grants Melvin’s wish with one accidental drop of her blood.
Turns out that Hollywood lied. Melvin doesn’t sparkle, he isn’t handsome, and the sight of blood? Gross!
Fangless, blue, and utterly naïve, Melvin must find a way to survive while being stalked by a shadow demon and vengeful ghosts. His un-life un-death takes a sinister turn when he stumbles into an underworld civil war where a clan of goblins want to finish killing him, and not in a good way.
With the dubious assistance of a reluctant spirit guide, a voodoo priestess, and a sweet, but psychotic, best friend intent on helping him become the most awesome vampire ever, Mostly Dead Melvin has to navigate the narrow path to redemption between sorta-life and un-death, without a map, a net, or a clue.
Set in the eccentric center of the Northwest, Portland, Oregon, Mostly Dead Melvin is a pop culture satire of the modern vampire mythos.

Foinah Jameson lives in Portland, Oregon, the delightfully weird center of the Pacific Northwest, and spends her days with a fabulous husband, two Norse Gods disguised as her daughters, and a menagerie of used animals. At night Foinah sneaks out to her office on the back deck under an umbrella where she writes feverishly on a battered Mac laptop, typing away madly until the sun rises. Dark, comic, creepy tales come to life as she sips cold coffee and chain-smokes aromatic cigars in the crisp night air.
She is the author of Marker of Faith -- a supernatural thriller, Mostly Dead Melvin -- a darkly funny pop culture satire of the modern vampire myth, and five short story collections. Her short stories and novels run the gamut of the supernatural to poignant vignettes of everyday life.
In a previous life Foinah was a musician, a publican, a fortune-teller, a chef, a burgeoning astrophysicist, and an artist rep.
Now a domestic goddess and a mother by day/writer by night, Foinah enjoys her alter ego as the smoking monkey who gets to use a laptop.

"Writing is so much cheaper than therapy! And you can drink while you do it."

You have subscribed to alerts for Foinah Jameson.

You have been added to Foinah Jameson's favorite list.

You can also sign-up to receive email notifications whenever Foinah Jameson releases a new book.