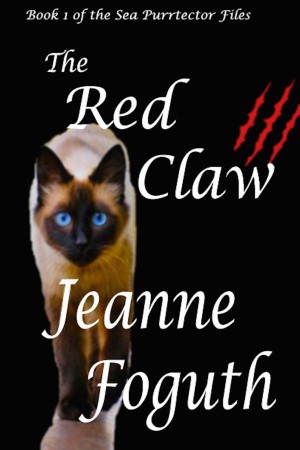 By Jeanne Foguth
Rated 4.89/5 based on 9 reviews
Dame Esmeralda, the Purrsident's littermate, has been catnapped. Xander de Hunter hurries to Jamaica to help rescue her, but C'Pause, captained by Valentine, a bulldog, follows Xander. Was the catnapping a trap? More
Xander de Hunter, Catamondo's Sea Purrtector, is setting up safe havens for cats, who live in the Caribbean, when the Purrsident's littermate, Dame Esmeralda, is catnapped.
But when he rushes to Jamaica to help Sir Simon, the Jamaican Purrtector, rescue Dame Esmeralda, C'Pause, captained by Valentine, a bulldog, who has been monitoring Xander's hurricane preparedness project for Dogdom, follows.
Upon arriving in Jamaica, Xander realizes that the rumors of Jamaica being one of Dogdom's strongholds is true. Will he be able to save Dame Esmeralda, or was her abduction bait to trap him?

Though Jeanne began her career technical writing, her love of romantic-suspense, whether it be present, future or in an unknown galaxy inspired her to write the novels she wanted to find in bookstores. Since marrying, Jeanne and her husband have lived from the arctic to the tropics, as well as from yacht to off-grid mountain home. She loves using vivid colors and flowing shapes in her oil paintings as well as creating edible landscapes.
You can always find out what she is working on and/or contact her at: www.jeannefoguth.com.

About the Series: The Sea Purrtector Files

In his official capacity, Kamikaze Xander assists cats wherever he advises his humans to anchor.

Your latest customer review is live on Amazon. We and millions of shoppers on Amazon appreciate the time you took to share your experience with this item.
from cheryl Weismantel on 17 August 2016

I was delighted to read The Red Claw

As a dog lover with a dog brain, I was delighted to read The Red Claw! Jeanne Foguth’s innate wisdom about the cat world is illuminated throughout the novel. After my dog brain differentiated the elaborate cat characters, the one dog who plays an important role in...

Xander is a special agent working for an organization known as Catomondo. As a Purrtector, he is called to action whenever the need arises, and his exploits are legendary. Inhibited only by the restraints of his humans and their boat, he is only able to travel where they go. That makes his job more difficult when he's summoned to investigate a catnapping in Jamaica. He has to put all his feline skills to the test to reach his destination and get to the bottom of Esmeralda's disappearance.

I loved the addition of cat lingo in the story (purrtectors, whispurring, purrsonal, etc). The author has done a fantastic job of portraying the feline mindset as well as describing his feline quirks and movements. His disdain for dogs brought amusement to the story, and his sidekick Sharkey was a great addition. Both characters have led interesting lives, and they are presented in a well-rounded fashion.

It was loads of fun to read the emails between the cats. If you've ever wondered what cats might message to each other, this is certainly the book for you! My favorite scene had to be the "fish cleaning". It had me grinning ear to ear. An excellent story, and highly recommended for anyone who would like to experience the world through the eyes of a cat.

Awesome story line! Very easy to follow, kid friendly in which many out there by others are not. Always kept me wanting to read more and my children and to have them interested in the story and wanting to rad it with me was phenomenal!!!!! Thank you for the opportunity to read an outstanding novel looking for more to come!

My mommy read me this purrfect story. I may only be a six month old kitten but I know a good book when I hear one. The way level of purrfection Jeanne makes me wonder if Jeanne is really a human or if she is a kitty herself. Everyone, humans and furbabies alike must read!!!!

OMG. This book was PUUURRFECT. I Puraise the author for being like minded with a cat. The wording through out tickled me and the ending tossed me through a "tail spin". I have not read a cat book this interesting since the Warrior series. I hope there are many many more from this series. I already went and follwed the author or Amazon so I don't miss any. Now I am off to look at adopting a simease cat. LOL

A purrfect read for animal lovers, particularly those more inclined towards our feline friends. A great book for all ages. My cat Willis has asked me to write, that this book is like a mouse, one you just want to sink your teeth into and never let go.

It was great reading this lovely cat-based story. You can almost see Xander getting wet, trying to get all the slobber off his fur, climbing the various trees, jumping into that truck filled with stinking fish, etc. It is as if the author, obviously being a tremendous cat-lover, has been able to physically put herself into his coat. What started off as a detective changed to something I did not expect! Loved that twist to the story, which also has several messages for the reader to ponder over afterwards. The book cover is absolutely beautiful and shows the very strong Siamese, which Xander is!

Great author. Great story, will read and re read for years to come, will read with my children and share with everyone I come across who loves cats!

I am so happy I got to read this arc with my 9 and 11 year old as well as fur babies (though Miss Livie Lou Who said there where to many cats and not enough dogs...what can I say chihuahua's) The rest of us enjoyed reading about Xander's travel to save Esmerelda and since reading the kids have been asking to know more about Jamaica. They want to sail their one day like Xander did. They are really looking forward to reading book number two of the series and have been following the authors blog for sneak peaks...
Thank you, Jeanne, for writing a family friendly story for thous of us in mixed human and furry families. There are few books both kids agree on and this one made the top of their lists. In fact my oldest is doing her book report on it.

I love this whimsical author. The stories are fun, fantastic and as a cat lover...ppppeeerrrrffffeeeecccctttt to curl up in bed with. Keep them coming Jeanne.

You have subscribed to alerts for Jeanne Foguth.

You have been added to Jeanne Foguth's favorite list.

You can also sign-up to receive email notifications whenever Jeanne Foguth releases a new book.