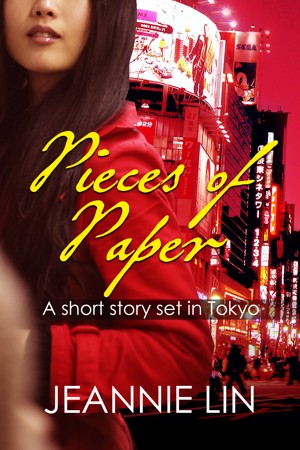 Pieces of Paper: A short story set in Tokyo

By Jeannie Lin
Rated 5.00/5 based on 1 review
A chance encounter brings a hint of romance to a young woman's journey through the streets of Tokyo.

Jeannie Lin grew up fascinated with stories of Western epic fantasy as well as Eastern martial arts adventures. When her best friend introduced her to romance novels in middle school, the stage was set. Jeannie started writing her first romance while working as a high school science teacher in South Central Los Angeles. After four years of trying to break into publishing with an Asian-set historical, her 2009 Golden Heart® Award–winning manuscript, Butterfly Swords, sold to Harlequin Mills & Boon. With two releases and four more upcoming titles all set in the Tang Dynasty, she's keeping her fingers crossed that this hard-sell genre will one day be hard to resist.

As a technical consultant, backpacker, and vacation junkie, she's traveled all over the United States as well as Europe, South Korea, Japan, China and Vietnam. She's now happily settled in St. Louis with her wonderfully supportive husband, and she continues to journey to exotic locations in her stories.

Reviews of Pieces of Paper: A short story set in Tokyo by Jeannie Lin

Lin prefaces this story by saying that this is a semi-autobiographical story about her own experiences in Japan about ten years ago. Its a very short story, just above 20 pages and I think well-written. The tone of the story is warm and welcoming as 'Jeannie' in the book explains to us how she came to be in Japan by herself lost and searching for the tea ceremony.

Throughout the story she observes how awkward she feels despite the fact she is Asian and surrounded by other Asians. I've never quite left Caucasian dominated areas before, or been in a situation where I couldn't insist that there be some sort of English around so I understand everything. The closest I've come would be Inner City Philadelphia (where you'd be hard pressed to find anybody who can speak English no matter their race) and certain parts of NJ.

Jeannie sets the scene well; the nervousness, but excitement one feels when visiting a new culture and learning new things. The awe when you realize that there are far more busy and insane cities out there then just in the US. The near constant bombardment of sensory data while you try to acclimate. I would have happily read about Jeannie's experiences while she wandered around Japan.

The inclusion of Scott, a graduate student studying Eastern Asian Religion, made for an interesting comparison for Jeannie and the reader. Jeannie observes that his everyman American looks felt more comfortable to her then seeing the scores of people who shared her genetic history.

This was a diverting insightful piece that felt kind of like talking with a friend after a trip. Jeannie, the character, isn't afraid to discuss her flaws or touristy thoughts. Her enthusiasm to enjoy her trip to Japan was obvious making the story relaxing to read.

You have subscribed to alerts for Jeannie Lin.

You have been added to Jeannie Lin's favorite list.

You can also sign-up to receive email notifications whenever Jeannie Lin releases a new book.