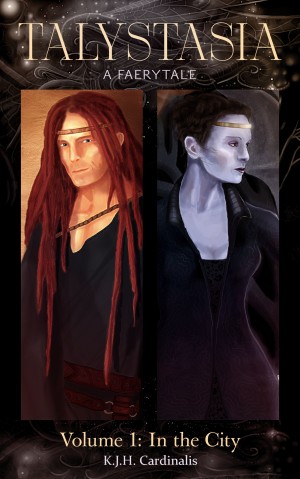 By KJH Cardinalis
Rated 5.00/5 based on 1 reviews
Talystasia stands divided. An ancient wall runs down the city’s center, and for centuries, the Lorens and Telyras have vied for dominance. But their endless feud is not the only schism that runs through these pages. Loyalties are fractured and hearts and minds are divided. Will Andreas Telyra and Roselia Loren triumph on the war grounds within, or will they succumb to the cycle of violence? More
My name is Roselia Loren.

Today I woke up and realized I’m no longer the faerytale princess. In one night, I lost the two people in the world who were most dear to me, and now I’m forced to shoulder responsibilities I never imagined. I can feel the walls of my ivory tower crumbling, and there’s nothing now that can spare me from the darkness.

Our city is divided. For centuries my family has warred with the Telyras across the Wall.

My heart is growing cold inside me, but it’s still beating. And that’s what scares me the most. I’m putting my trust in all the wrong places … like the handsome lieutenant that stabbed my father’s general in the back. If he’s a traitor, then what am I?

But I know it’s time to stop running.

Could there still be a happy ending for me?

My name is Andreas Telyra.

For twenty-two years, I’ve been fighting a war that isn’t mine, chained to this inherited destiny by a crown I can’t remove. My heart is black and charred inside me, and I feel a darkness crawling through my veins.

Now my only hope is Roselia Loren, the daughter of my lifelong nemesis. Maybe she’s different. More likely she’s as savage as the rest of her cursed line. And even she isn’t? I’ve taken those she loves from her forever. She has grown up to stories of my brutality—most of them true.

I’m so close to giving up, to relinquishing the last shred of my humanity. If I do, I’m pretty sure the next casualty will be someone close to me.

There are no happy endings for me. But I have to try. The light in me is dying.

My words are shattering glass
Smashed beneath the weight of my grief.
A flickering flame,
I have to keep it safe
But I won't whisper your name,
Not when I should shout it.
But even in this fumbling silence
Falling
Sometimes I catch the scent of you
Burning in my veins
Souls, you say, are their own coordinates.
You are the binary star system I navigate by,
Even when I'm blind in the dark,
So the when doesn't matter
Or the where or the how,

Because I know I'm coming home
The long way around.

HJK Cardinalis’ Talystasia: A Faerytale for Grown-Ups is the telling of a fantastic tale that hits far too close to home in many respects. If you’re seeking escapist fantasy, this novel isn’t for you. But if you’re looking for superbly written character-driven fantasy with familiar settings—castles, streets, shops, and so on—just slightly removed from the ordinary by means of a wall that divides the city of Talystasia, one that seems to possess very malignant powers, then read on.

The story centers principally on four characters: Andreas Telyra, the short-tempered ruler of Talystasia East; one of his slaves, an adolescent girl named Julia; Roselia Loren, the ruler of Talystasia West, put there by the murder of her father and brother by Andreas, and her sudden military commander, a traitorous lieutenant-turned general named Corin Costellic. He’s sudden because, during a battle with Andreas’ forces, he and his team assassinated the entire command in a brutal act designed, ostensibly, to save the military from continued degeneracy and sloth. Roselia (Rose) can’t be sure. Corin’s motives are obscure from the get-go. The problem is, her family’s aren’t. Greedy to the last, filthy with the urge to claim the throne, she has no one she can trust and no one she can turn to. Corin’s protection is all she has.

She has no experience ruling. Scared for her very life, she knows that the ruler across the Wall is bloodthirsty and heartless. Or—that’s what she’s heard her entire life, especially from her father and brother, both of whom die at his hands. But when Talystasia West’s forces break and Andreas’ men flood her half of the city, she is confronted by Andreas himself, who, miraculously, spares her life.

Andreas, for his part, despises his life. He doesn’t want to rule, and never has. But he had no choice. As it turns out, both ruling sides are bound by mysterious metal circlets that “choose” the new ruler and which, literally, bind themselves to their heads. When Rose’s father and brother dies, the circlet that was on her father’s head rolls horribly to her. She has no choice but to put it on, because if she doesn’t, it’ll do it itself.

Andreas has worn his circlet for twenty-two years. And the bloodlust he’s been accused of, and is in fact guilty of, is increasing. His relationship with Julia, his personal slave, has always been precarious: he’s beaten her viciously in the past, but now the beatings are getting out of his control. He knows one day he will kill her, and will probably enjoy it, too. Julia, full of courage and spit, refuses to abandon him, and in fact goes out of her way one night to save him. She sees—or tries to see—good in him, even when he’s brutalizing her. As a character of contradictions, you can’t get more contrast than Julia. Then again, Andreas, her beloved master, seems increasingly torn by his. Something’s going to give, and when it does, death will likely work overtime.

You aren’t going to find wizards and magic spells flying about the place in this work, and that’s a good thing. This place—Talystasia—is just slightly removed from our world. The magic that’s there seems constrained to the circlets and to the Wall, and to the Elders, elemental beings tasked with or integral to the health of the world, which, they tell Andreas, is suffering more and more. We see that magic doesn’t make people better, that sloth and indolence and vapidity are just as common here, just as hateful. No one, for example, questions the anonymous power of the circlets. They’re simply accepted, and power is conferred absolutely to the ones they choose. People are seen for what they are, both here and there: as mooing, subservient, unthinking cattle.

If you want a totally engrossing, thought-provoking, character-driven fantasy, this is your book. It’s dark, and oftentimes it’s very depressing. But there are distinct glimmers of hope in the morass and blood and brutality, and genuine humanity shines out even during the darkest days. You’ll hold to them, as I did, and in so doing find yourself caring deeply about Andreas and Julia, Roselia and Corin.

You have subscribed to alerts for KJH Cardinalis.

You have been added to KJH Cardinalis's favorite list.

You can also sign-up to receive email notifications whenever KJH Cardinalis releases a new book.