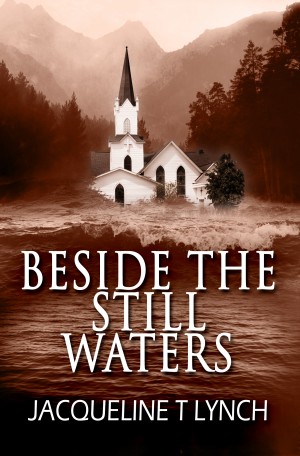 Beside the Still Waters

By Jacqueline T. Lynch
Rated 1.00/5 based on 1 reviews
Four towns…dismantled as an entire valley is prepared to be flooded. The past is being wiped clean, the present threatens, the future belongs to the fearless.

Three generations weave a tapestry of isolation and stubborn independence, battling the forces of nature, the Commonwealth, and each other in this family saga. A courageous girl becomes the guardian of her family’s heritage, and ultimately,

Jacqueline T. Lynch’s novels, short stories, and non-fiction books on New England history and film criticism are available from many online shops as eBooks, audiobooks, and paperback. She is also a playwright whose plays have been produced around the United States and in Europe, and has published articles and short fiction in regional and national publications. She writes Another Old Movie Blog on classic films, and the syndicated column Silver Screen/Golden Years.

I love a good family saga. I love historical fiction. I loved the gilded age, and the turn of the twentieth century. I'm a massive WWI wonk.

So, when Beside the Still Waters, a family saga set in 1904 to 1938 landed in my review pile, I was a happy little reader. Probably a little too happy, I was so excited to see it, I put it in the to review pile even after thinking the beginning was a little choppy and rough.

Let's take a minute and talk about what a historical family saga entails. There should be a huge, sweeping collection of deeply rounded characters, in a vibrantly alive piece of time. John Jakes and Herman Wouk wrote my two favorite sagas, and those tales are massive, fully alive and breathing pieces of interactive history. Basically, if the author is doing her job, you get to join a family and live with them through some fascinating bit of history.

There should be a main story arc, this is usually the sweep of the chunk of history the book is set in. On this plot line the characters or more or less acting like tour guides, giving us an intimate view of life during whenever the story is set. This is the plot line that ties everything together, and should be a meta image of the smaller individual conflicts going on in the secondary and tertiary plot lines.

Tirtiary (and on and on, a real saga can have at least one main plot line per main character, and often side ones for the side characters and so and so forth. After all, it's a SAGA; no one's worried about it coming out too long.) plots involve romances, coming of age stories, individual conflicts for individual characters.

And, if it's not clear from the above, or the fact they're called sagas, a family saga should be long.

So, basically, when I read a historical family saga, I want a huge, complex, well-researched book, brimming with fascinating characters, in depth locales, plot twists and turns, that all wrap into some sweep of history and a satisfying conclusion for all surviving family members.

Besides the Still Waters is well researched. In fact, I would have very happily read a straight up history of the Quabbin Reservoir by Lynch.

It fell well short on all of my other criteria for a good family saga.

"A rift between two brothers, Eli and John Vaughn, at the turn of the 20th Century continues through to the next generation as John tries to use Jenny, Eli’s daughter, in a plot to regain the family farm from Alonzo, who now runs it, who is Jenny's love. John is broke and eager to sell the farm to the state, which is buying up area property for the coming reservoir. Both Alonzo and Eli refuse to sell their properties, and protest removal by eminent domain. Torn between loyalty to her family and heritage, and the allure of a future beyond the valley, Jenny refuses to remain powerless like the men she loves, but looks for a way to take control. A disastrous decision may prove fatal in a race against time."

That's the back of the book blurb. It's a little choppy, but promising, right? I thought so. Here's the problem: at fifty percent through, the plot, as stated in the blurb, is just, barely beginning to get rolling. To use a historical example that most people are familiar with: if the main plot of this book had been wrapped around the American Civil War, the story would have started with the writing of the Declaration of Independence to get us familiar with the fight over slavery. Jenny (who is identified as the main character earlier in the blurb) isn't even born for the first third of the story.

The antagonist, John, shows up for less than three pages of on screen time, and then vanishes for a third of the book. Once again, a family saga should be long and complex enough to follow the antagonist as he runs away, blows his fortune, and then take him back to the main swing of things, so that by the time we get to the conflict, we're deeply attached to both sides of the argument. A family saga needs the depth to follow multiple characters through their lives while still pushing the main plot line forward.

The writing style is choppy. I'd be reading away, getting a little plot and character development, then into straight history, and back to plot, and back to history. From what I can tell this is intentional, but instead of highlighting how the meta history compliments the individual lives of the characters it's jarring and breaks the flow.

The writing style is non-fiction. As I said, I'd happily read a straight history by Lynch, but I don't want to read fiction by her. In non-fiction it's perfectly acceptable to tell your reader what happened, showing them is nice, but usually not the goal. In fiction the idea is to show your readers what is going on. But, if you pick 3rd person omniscient as your point of view, (the narrator voice) it's very easy to slip into telling your reader what is going on. And tell she does. So much telling that it's actually pretty rare to run into a scene that really is showing something, but when one does occur, a chunk of straight history will show up in a page or so and stop it dead.

And, just to make me grit my teeth, the formatting is wonky. I just wrapped the beta version of my latest novel, and my hubby wanted a version for his Kindle. (He doesn't like reading on his computer, so no Word doc for him.) Anyway, I put the beta version through the Smashwords' Meatgrinder with no prep at all, and got precisely the same sort of wonky formatting Beside The Still Waters has. Basically, it looks fine, and then for no real reason it suddenly changes font, and changes back, and forth again, all through the book.

As I said in the email I sent off to my beta readers, the kindle version looks like it was formatted by drunk weasels, drunk weasels that like Courier. It's not illegible, but it is annoying. Deeply annoying. And maybe part of the reason it annoys me so much is that I know how much work it takes to fix this (about an hour-hour and a half), and how ridiculously lazy it is to just leave it that way.

So, all in all, I'm not impressed by Beside the Still Waters. I wish it had been a straight history of the Quabbin Reservoir. I think I would have enjoyed that quite a bit.

You have subscribed to alerts for Jacqueline T. Lynch.

You have been added to Jacqueline T. Lynch's favorite list.

You can also sign-up to receive email notifications whenever Jacqueline T. Lynch releases a new book.