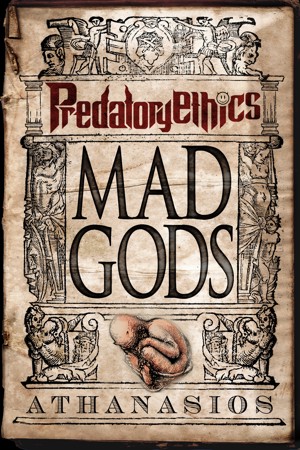 Rated 4.00/5 based on 3 reviews
I was totally enthralled. I have read many books on the Templars, the Vatican and the Illumaniti, and this is one of the best. Period. Elliot Malach More
Constantine Paleologos does things grudgingly. As a descendant of Byzantine royalty he dutifully returns to Istanbul, the city his family lost centuries before. He is then set on a life-altering course against Satanists, Templars and Dark Nobility to kidnap the Antichrist. Each faction wants to raise the Beast but only Constantine wants to give him the freedom to choose his own destiny.

Mad Gods is the most high-stakes "nature vs nurture" experiment in history. An occult thriller of one man against the End of the World.

Think 300 with some Clive Barker and a little bit of the Exorcist thrown in for good measure. The plot will drive you to never stop reading and you will have to move to the next page.Albert Robins III

Athanasios works in Montreal as a graphic/video artist, illustrator & writer in dvd production & film. He has been researching & crafting Mad Gods: weaving in factual & rumoured history for over ten years.

Athanasios has been interested in religion & faith since childhood. This led to studying a bewildering variety of beliefs from pagan, wicca, judaism, christianity, islam, to hindu, buddhism, shinto, luciferianism & much more. The interest made its own momentum & brought Mad Gods.

His other interests include most entertainment, from film, to television & books. He won't try video games for the same reason he doesn't keep his favourite booze in the house; he would do nothing else. There was a short time that he was into World of Warcraft but that became the obsession he knew it would be. He had to leave it for a deeper & more engrossing one: Mad Gods.

Mad Gods Trailer
God's Armageddon is turned upside down when the Antichrist refuses to follow Destiny. It's an apocalyptic escape from Satanists, the New World Order & the Catholic Church.

Mad Gods is actually teased in the short story I Am Eternal, as a book that Simon is reading, and it is the first of the “Predatory Ethics” series. It is the story of the growing up of the anti-Christ, and all the forces (Catholic church, Templars, Satanists) that want to control and use him when he comes of age.
When this book opened, it did not seem like it was the story of the anti-Christ: rather, it was the story of a man struggling with his calling. The way the story was setup was different, with it jumping around from place to place, and as the book progressed, from time to time. After the man accepted his calling, he took the anti-Christ under his wing and began teaching him, and the world continued on around them, with both of them “oblivious” to what was going on, but at the same time, the caregiver was prepared for anything, which does happen at the end.
The story was deeply detailed, and well-researched, with flashbacks to ancient times showing previous incarnations of the anti-Christ, all of which ended with his dying. It also introduced us to Simeon Magus (yes, the same one from I Am Eternal), only much younger, and much hungrier for something to believe in. I was intrigued with the discussions between Magus and the Byzantine-time anti-Christ and their depth of understanding of what they were discussing.
The subplots concerning the Catholics, the Templars, and the Satanists all trying to locate the anti-Christ was intriguing, and kept me guessing as to whether or not I was going to turn the page and find one of them in the anti-Christ’s house, leading him away for their bidding.
The book was definitely a deep book and you can easily find yourself getting lost in it, but be warned that it is not for someone who is not grounded in their faith, as it could sway your beliefs. There are deep rituals described in the book, and a lot of swearing and violence, especially toward the end.
If blood, gore, swearing, and violence is not your cup of tea, then steer clear. You have been warned.

(reviewed the day of purchase)
Andrew Magee reviewed on April 2, 2013

I must say I was surprised by this book, it was described to me as a horror novel with some elements of exploratory fiction. What I got was not really classic horror, fantasy or religious fiction but a marriage of all three.

Luckily it also turned out to be a good page turner that was well written and briskly paced, the author appears to have put a lot of effort into his research and it shows in the little details that are throughout the book. These range From historic details, musical and even cultural references, these add to the story so much that the book almost has a sound track as you are reading.

To summarise: A good book, well written and worthy of your time and attention.

First and foremost, let me say that I started reading Mad Gods with more than a little skepticism and was fully prepared to have to slog through a written work that I figured was more politically coded than the Bible. I was prepared to be bored out of my mind, Athanasios and you can be annoyed with me for it later but read this review first and perhaps you’ll change your mind about it.
You see, I had interviewed Athanasios at one point and during the course of said interview, he had explained what Predatory Ethics means to him. His definition was something akin to, “Do unto you because I can,” and since he’d written a few works about it and I had read the reviews and garnered some small kernel of the plot line from them, he asked me to read and review the books. Now that I’ve read Mad Gods I must say that I’m glad I have because it was not only an interesting and engaging read, it has underlying meaning and morals intricately interwoven into the storyline that are impossible to miss. Athanasios seems quite adept at multitasking in his written works and I can respect that.
I couldn’t help but notice one consistently underlying theme through out the entire story and it was as simple as this: Destiny is not preordained or predetermined, your life and the direction it takes has everything to do with the choices you make. While a person’s path may be set in front of them, it is up to them to determine which direction that path goes. It’s integral to the story and carved like stone into the plotline.
I enjoyed the blending of religious iconography with mysticism and mythology as well as occultism. Mad Gods was an artful and masterful blend of all the myths, legends, rituals, rites and beliefs to which everyone clings, both the religious and the faithful and it painted a vivid portrait of the writers’ beliefs about the circumstances that brought about all our modern day faiths. Athanasios has a remarkable grasp on historical religions and myths and legends and their influence on the modern day right down to the everyday choices we make.
In the end, I’d have to give Mad Gods a four star rating because there are formatting issues that took me out of the story at first. I thought that it was patterned for dialogue and wondered at it until I noticed that there really was no discernable pattern and I was thereafter able to disregard it and just continue reading. There are also some punctuation errors though I want to stress that they didn’t interrupt the story or take from the storyline for me. I do believe that this is not a work for anyone who is easily offended or for kids because there are openly sexual encounters and though they’re realistically not terribly descriptive, they are not for those who don’t like written illustrations of same sex encounters. I really liked Mad Gods and believe that anyone with an open mind will think the exact same thing I did when they read it; Well done, Athanasios!

You have subscribed to alerts for Athanasios Galanis.

You have been added to Athanasios Galanis's favorite list.

You can also sign-up to receive email notifications whenever Athanasios Galanis releases a new book.