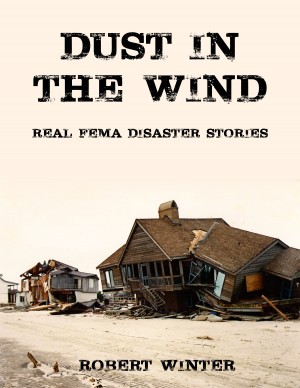 In this second edition, Dust in the Wind proves to be an entertaining look at a big man with big personality and through his experiences, personified his growth as a humanitarian. Robert Winter provides a very human face for FEMA. This book provides more than a glimpse of what truly happens behind-the-scenes and what is far removed from the media spotlight during a disaster, and how crisis can bring out not only the worst in people, but also the best.
Available ebook formats: epub mobi pdf rtf lrf pdb txt html
First 15% Sample: epub mobi (Kindle) lrf more Online Reader
pdb
Price: $4.99 USD
Buy Add to Library Give as a Gift
How gifting works
Create Widget
Tags: disasters hurricane andrew hurricane hugo fema disaster preparedness earthquake relief effort disaster relief hurricane relief federal emergency management agency fema assistance
About Robert Winter

Author Robert Winter studied psychology in college and owned his own construction firm with a General B-1 license in California before spending 25 years as a contract FEMA inspector and three years as a certified building inspector. In 1989, when he set out on his first disaster, his life became a “living adventure.” This era of his life changed him to his core.
Within one year of beginning the work and telling friends and relatives his experiences, he began to repeatedly hear, "Robert, you MUST write a book!" Because he had focused so much time and energy helping victims of the devastation and destruction that only Mother Earth herself could inflict, it is only now—more than twenty years later—that he actually sat down to write that book.
Some people are just born to protect others—Robert Winter is one of them. Whether it's "A-list" celebrities in the midst of Los Angeles and Las Vegas crowds or "everyday people" trying to recover from the horrors and destruction of a natural disaster, "Frecks" is the man for the job.
As a world karate champion, and 3rd degree black belt, he teaches rape prevention techniques to women; he has traveled the country working as a bodyguard to a single American flag that was part of one of the most famous incidents in professional baseball history.
Of course, a lot of people might think Robert needs to be protected from himself instead of the other way around. He is a daredevil and confirmed adrenaline junky who happily dives for abalone among great white sharks (and did a stint as a commercial diver), bungee jumps, waterskis and he's even spent half a year living in Antarctica, where he went diving beneath the polar ice! He received the Antarctica Service Medal by the National Science Foundation and the Antarctica Service Medal by the Department of the Navy for his contributions to the exploration of Antarctica.
Adventurer, friend to many, protector of all he meets, Robert chose the words "Help, Hope, and Comfort" as his business motto, but they are also the words that best describe his life's work and the goals of his very first book.
Today, he always has two bags packed prepared to fly into a disaster zone.

Reviews of Dust in the Wind: Real FEMA Disaster Stories by Robert Winter

You have subscribed to alerts for Robert Winter.

You have been added to Robert Winter's favorite list.

You can also sign-up to receive email notifications whenever Robert Winter releases a new book.