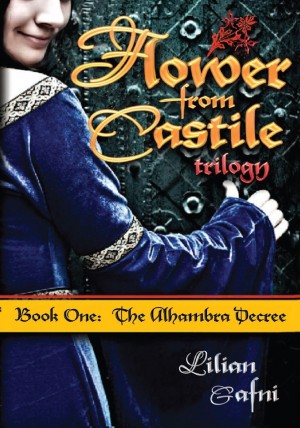 The Spanish monarchs fight to unify Spain as a Catholic nation; as soon as the war is over, the Queen Isabella must fulfill her vow to the grand inquisitor to rid Spain of all heretics. She decrees the Jews’ exile.

Isabella Obrigon must now decide whether to follow her heart and join her endangered brethren seeking exile, or stay and live a lie.

Lilian Gafni writes with passion about the experiences of displaced Jewish populations because she experienced it herself. Born in Cairo, Egypt, she attended the non-denominational French Catholic School, St. Vincent de Paul. Jews had lived peacefully for centuries in Egypt; however, a dangerous current began coursing through the city that threatened the lives of Jews. Her parents moved the family in 1951 to the newly formed Jewish country of Israel, where they hoped to raise their children in peace and safety. As have many Jews before her, Lilian had to adapt to a new life, a new country, and a new language. She served in the requisite two years in the Israel Defense Forces, which sent her to guard a Kibbutz (collective farm) in the region of the Negev. There she met American-born Joel, who later became her husband. After their marriage, they moved to the United States to his home state of California, where they raised their two children. Lilian is the author of the Flower from Castile Trilogy, Hello Exile, and Living a Blissful Marriage: 24 Steps to Happiness.

About the Series: Flower from Castile

In Flower from Castile Trilogy, Isabella Obrigon lives a life of privilege in Seville and about to be married to her fiancée Juan Escobar de Santilla. Her parents who adore her grant every one of her wishes. From this life of luxury and want for nothing she is kidnapped and forced to flee for her life. When a secret is revealed to her she becomes torn between her previous life and the new one imposed upon her.

Also in Series: Flower from Castile

You have subscribed to alerts for Lilian Gafni.

You have been added to Lilian Gafni's favorite list.

You can also sign-up to receive email notifications whenever Lilian Gafni releases a new book.