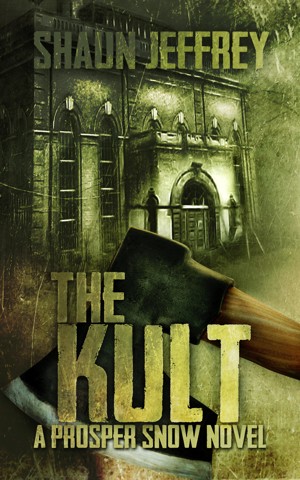 Rated 4.67/5 based on 6 reviews
People are predictable. That's what makes them easy to kill.

Out of misguided loyalty, police officer Prosper Snow is goaded into helping his friends perform a copycat killing, but when the real killer comes after him, it's not only his life on the line, but his family's too. Now if he goes to his colleagues for help, he risks being arrested for murder. If he doesn't, he risks being killed. More
People are predictable. That's what makes them easy to kill.

Out of misguided loyalty, police officer Prosper Snow is goaded into helping his friends perform a copycat killing, but when the real killer comes after him, it's not only his life on the line, but his family's too. Now if he goes to his colleagues for help, he risks being arrested for murder. If he doesn't, he risks being killed.

(Book 1 of the Prosper Snow series)

Shaun Jeffrey was brought up in a house in a cemetery, so it was only natural for his prose to stray towards the dark side when he started writing. He has had three novels published, 'The Kult', 'Deadfall' and 'Evilution, and one collection of short stories, 'Voyeurs of Death'. Among his other writing credits are short stories published in Cemetery Dance, Surreal Magazine, Dark Discoveries and Shadowed Realms. The Kult was optioned for film by Gharial Productions.

The Kult movie
Trailer for the film of The Kult

"The Kult" is a serial killer thriller which brings to my mind classics such as Seven. The cat and mouse investigation with a meticulously well-planned serial killer, the grittiness of the settings and people, the gruesome murder scenes and the promised significant end-game would resonate well with fans of that movie. However, this story goes a bit further and challenges the morality of our detective, providing another layer (and complication) to the plot.

Like all good thrillers, this one is a real page turner. I found myself bounding through chapters that were of easily digestible size while focused on advancing the plot, even while our hero’s investigation is being mired in his own tangled web of misplaced loyalties and old, binding childhood pacts.

The detective, Prosper Snow, is a fairly jaded character wracked with guilt over an accident which crippled his wife and a begrudging member of a pact created by four outcast children when he was fat and mercilessly teased. I’m not sure I was overly convinced by Snow. His childhood experiences seemed a little over-the-top for my liking. Where one character summarises him as obviously destined into a life to help others, this didn’t quite gel with some of his actions performed on behalf of friends over the years. Although he does attempt to make some kind of moral stand in the story it all seems too little, too late for me. His friends, although not very deeply explored for the most part seemed a little less problematic.

The author has tried to put together a pretty ambitious plot. For the most part it is executed well. However, again Snow seems to be the weak link. For a good deal of the story he seems to be staring stupidly at photos with a shocked expression and bumbling through his own mess in a way that made me want to scream. Then suddenly we see insight and intelligence as if from nowhere. Maybe he’s just a completely self-absorbed person who finally pulled his proverbial finger out and started trying to solve a case. It’s hard to say, but luckily Oracle, our serial killer, was very entertaining and much more consistent.

When everything heats up, it’s a roller coaster ride, but not without one or two further incongruencies. For example, why would a police officer with a loaded gun choose to run away from an attacker without a gun rather than shoot? To satisfy the author’s overriding aims rather than to present a logical plot development to be sure. There’s quite a few loose ends as the plot becomes quite messy and I believe the author has done a fairly admirable job of tying them up. However, there are some convenient elements that assist such as a witness who seems content to fade into the background and a partner hell-bent on keeping only one copy of her investigation notes (apparently not believe is sharing or keeping digital copies of anything).

This isn’t to say that I didn’t enjoy the book – I did so very much. I loved the Oracle even if I did manage to work out who he was well before the actual revelation (the author’s clues were pretty heavy-handed). Even after he was revealed he still provided continued entertainment. I liked quite a few of the additional cast and found the story compelling despite the issues I had.

The prose itself is really good. I enjoyed the language he used and could picture some of the imposing or just downright depressing settings of the book. He seemed to exercise a good command of some of the gorier aspects of the story. They are certainly there throughout, but I didn’t sense the relish that sometimes permeates such descriptions and leaves me wondering whether such scenes are supposed to have a somewhat pornographic feel. For that I was thankful.

If the serial killer thriller is your milieu, I would give "The Kult" a try. And if you like it, the author has published a second Prosper Snow book complete with another serial killer to chase.

I stumbled across Shaun Jeffrey the first time when I read "The Kult". Honestly, I was unaware of the film. I couldn't read the whole thing at once. The book is like finding something that you know you probably shouldn't be looking at, but you go back again and again anyway. It was so intense I could only read it in small bits.

i was drawn to this book from various promos & plugs on forums and the like and i must say, these people werent wrong... a gripping thriller from start to finish with nicely fleshed out (literally sometimes - see what i did there) characters and enough description to set the scene and atmosphere without detracting from the story, which twisted and turned to a conclusion that i wasnt quite expecting... although i must say that i was screaming at the kindle screen about the significance of some of the clues... quite often i could literally see the action in my mind as i was reading it, the story-telling was so real...
the hero, or anti-hero i guess, has you rooting for him even though he is a bit on the dark side himself, a bit of a bad boy and i am delighted to see him return in Killers...

"People are predictable. That's what makes them easy to kill."
"Look out, look out, there's a monster about."


And a quote I'm totally ripping off from a friend, but fits this book so perfectly: "The scariest monsters have human faces".


This book was scary. The beginning was pure horror. 10% into the book, and I was afraid to leave the house. At one point near the beginning, I almost put the book down saying "no more". But I didn't. Putting the book down doesn't make the monster go away.


Vengeance, Retribution, Bait... There's a lot of reasons to kill. Detective Prosper Snow (coolest name ever, by the way) is now on a case to find The Oracle. No one is safe from this serial killer. If he gets ahold of you, you are definitely going to wish you were never born.


I really enjoyed this book. It had some very strong elements of horror. In fact, I wouldn't recommend it for the very faint of heart or easily offended - unless you can skip over some parts. In which case, you should get it, because the rest of the book is definitely worth withstanding some very scary parts.


While taking notes for this book, I wrote down "I don't immediately like Prosper. He seems like he has a dangerous secret". But my opinion of the man drastically over the course of the story. Prosper snow takes you on his journey with him, and you feel it all. Stress, regret, fear, love, some more fear, a dash of paranoia, and so on and so forth. But who do you trust when the evidence pushes you in every direction it can?


Something else I really liked about this book is that I instantly felt like I connected with the victims. That only made it that much more difficult when they actually became the victims.


The characters are well written around a story that is well written. You get a history on everyone, and really feel like you get to know them. I felt it was fast paced, and I finished it in just a couple days.

It is a macabre pressure-cooker with intense plot twists.The characters are deep and very well thought out. If you like authors like Kaaron Warren you like Shaun Jeffrey.

I loved this book. Very well written and I was hooked. I ended up going to be later than I want because I couldn't put this book down.If you are into gory and terrifying thrillers than this is a good book for you. Shaun Jeffrey is a awesome writer and is now one of my favourite authors.

You have subscribed to alerts for Shaun Jeffrey.

You have been added to Shaun Jeffrey's favorite list.

You can also sign-up to receive email notifications whenever Shaun Jeffrey releases a new book.