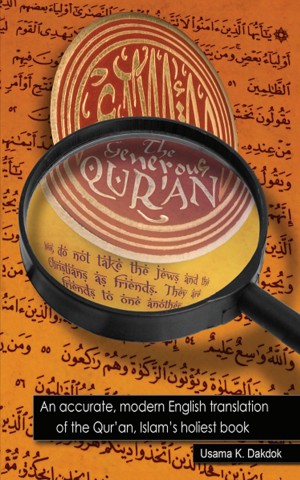 This book is not just for Jews, Christians, or Muslims, but for everyone who speaks English and lives in the West. It is for atheists, agnostics, or anyone seeking an understanding of what is actually contained in the Qur’an—the basis of the Islamic faith. This is a faith which is now increasingly impacting the West in so many ways ranging from recruitment and immigration to terrorism.

The reader might ask, "Why do we need another translation of the Qur'an?" After all, there are at least a dozen English translations available for those studying Islam, even if they are not all widely available to the Western reader. However, existent translations are better described as interpretations, most of which were not even written by native Arabic speakers, and which generally are written for the approval of prevailing Islamic orthodoxy, copied from each other and with content manipulated to present interpretations that are more acceptable to the Western reader.

Consider the following comparison. Notice that Yusufali and Pickthal translations made Mohammed a good husband while the Arabic Qur’an and Usama’s translation expose Mohammed to be a womanizer.

Qur’an 33:50 (Dakdok) “…And a believing woman if she gives herself to the prophet, if the prophet desires to have sex with her, this is a privilege for you but not for any other believers… that there may be no shame on your part…”

33:50 (Yusufali) “ ...and any believing woman who dedicates her soul to the Prophet if the Prophet wishes to wed her;- this only for thee, and not for the Believers (at large);… in order that there should be no difficulty for thee...”

33:50 (Pickthal) “...and a believing woman if she give herself unto the Prophet and the Prophet desire to ask her in marriage - a privilege for thee only, not for the (rest of) believers… that thou mayst be free from blame,…”

The need for a clear understanding of what the Qur'an actually teaches is more important at this time than ever before, now that Islam is being welcomed with open arms and in general ignorance by the West. The Generous Qur'an is the first objective translation by a native Arabic speaker attempting to be as literal as possible while still communicating the meaning of the verses.

The question is sometimes asked, "Why do Muslims terrorize and hate Jews, Christians, and others?”

The true answer has been suppressed by Muslim leaders and by some in the media. Many believe that terrorists are just extremists or Islamic fascists, but a simple reading will reveal that the Qur'an itself is the source or terror. The word jihad (holy war) was never mentioned by Yusufali and Pickthal, but in the Arabic and Usama’s translation, the word jihad was mentioned in twenty-nine verses. Islam is continually touted as "a religion of peace," yet the Qur'an itself does not call for peace. Indeed, "Islam" does not mean "peace," but rather "submission." Western Muslims only speak of "peace" because they either do not know what the Qur'an truly says, or they practice taqiyya (Qur’an 3:28) because they do not presently have "the upper hand (Qur’an 47:35)."

Much labor has been invested in this translation which hasn’t been sanitized for Western consumption. If you want soft and sanitized, go for Yusufali (mosques will ship one to you at no cost); if you want the truth, read The Generous Qur'an.
Available ebook formats: epub mobi pdf rtf lrf pdb txt html
First 10% Sample: epub mobi (Kindle) lrf more Online Reader
pdb
Price: $9.99 USD
Buy Add to Library Give as a Gift
How gifting works
Create Widget
Tags: islam islam and christianity generous islam religion muslim ebook quran and bible generous quran usama dakdok
About Usama Dakdok

Usama Dakdok, an Egypt-born Christian, first learned about Islam while in government schools in his home country (as does every other student in a Muslim country). He furthered his university degree education at the High Institute of Social Work, Egypt, which included the study of Sharia (Islamic Law).

Because Arabic is his native language, he discovered upon arriving in America in 1992 that the commonly used English translations of the Qur’an were full of misrepresentations that minimized its violent teachings as revealed in the Arabic text.

Having an expert understanding of Islam, he deeply desired to reach out to Muslims in America with the Gospel of Jesus Christ. So, in 2001, he founded The Straight Way of Grace Ministry which has a two-fold purpose: to equip the Christian church to minister to Muslims, and to warn all Americans about the deceptive methods being used by Muslims to lead so many into the cult of Islam.

For over a decade, Usama has traveled extensively throughout America and Canada sharing the powerful message of “Revealing the Truth about Islam.”

Usama holds a B.A in Theology and a M.A. in Missiology from New Orleans Baptist Theological Seminary.

The Generous Qur'an
The only accurate English translation of the Qur’an available anywhere! It is a one-of-a-kind resource that exposes the true nature of Islam's most holy book. This book is not just for Jews, Christians, or Muslims, but for anyone who speaks English and is seeking an understanding of what is actually contained in the Qur’an—the basis of the Islamic faith.

Reviews of The Generous Qur'an: An accurate, modern English translation of the Qur'an, Islam's holiest book. by Usama Dakdok

Very important and Must own book for all Christians and muslim

(reviewed the day of purchase)
Carlo Franco reviewed on Dec. 21, 2020
(no rating)
Very important and Must own book for all Christians and muslim

(reviewed the day of purchase)
Mussie Teklebrhan reviewed on Oct. 17, 2020

Great and easy to understand, may God bless you Osama Dakdok.

thank you for your and the Lords work Usama, finally a quran I can trust!

Finally we can read the real quran in English! Thank you, Usama!

You have subscribed to alerts for Usama Dakdok.

You have been added to Usama Dakdok's favorite list.

You can also sign-up to receive email notifications whenever Usama Dakdok releases a new book.