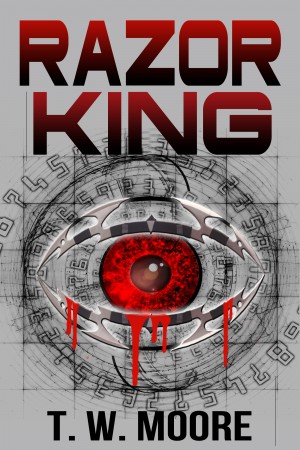 By T.W. Moore
Rated 4.50/5 based on 2 reviews
Razor King is the story of one man’s quest to regain control of a technologically-advanced, yet environmentally-ravaged planet that through the advent of nanotechnology and trillions of hidden and embedded micro-cameras, has been taken over by two super-powerful, AI enhanced, quantum computers that not only have the ability to watch and dictate your every move – but also know what you think! More
You’re being watched… Your every word… Your every move…

… The air that you can breathe smells rancid and leaves a copper taste in the back of your throat. A much-depleted ozone blisters your skin and forces you to work by night and sleep by day.

Welcome to your future – to the year 2080 – to a world turned upside down.

After a mini-nuclear war wreaks havoc on the planet, the newly-formed “World Council 7” (representing each of the seven continents) makes a fateful decision – to bring two super-powerful Atomic Quantum Computers online to scrutinize, monitor and record virtually every step mankind takes. Soon thereafter, with the help of nanotechnology and billions of hidden, miniaturized cameras, the QCs wrest control of the planet from the WC7. Using their own autocratic, demented, AI-enhanced minds, they implement their own oppressive rules.

Nighttime is what you fear most, though. That’s when RAZOR KING (a ruthless “slice’n’dice” enforcer) and his underground loyalists come out to orchestrate bloody “organ harvests”. Reselling the organs back on the black market at exorbitant prices helps finance their life and death struggle to take back control of the planet from the omniscious QCs.

But there is hope… and he goes by the name of CAPTAIN MATAGON.

The QCs authorize the highly-decorated CAPTAIN MATAGON to lead a specially-trained and brutal anti-terrorist unit (BATTLE BORN) to bring in Razor King, his band of underground butchers and the mysterious, genius underground leader himself -- DR. OZSO RUKUR -- either dead or alive. But Ozso has a secret agenda all his own and will stop at nothing to succeed – to be the first person to actually marry human DNA into digital DNA and merge himself physically into the QCs achieving ‘God-like’ singularity and take control of every soul on the planet.

Caught in the middle (and the desires) of Razor King and the captain is the beautiful, mysterious LITILLA -- a memory impaired microbiologist who is temporarily living at the captain's compound because she may hold the key to invaluable information that could either save mankind... or lead to its very extinction.

T.W. Moore is a former free-lance columnist for the Portland Press Herald, Maine’s largest newspaper, and author of "I Love Today – Musings From New England". He lives in Maine.

The year is 2080, the setting a very bleak environmentally ravaged earth where mankind has quit trying to "rebuild, refurbish, or replenish." The world went to war over water, and the surviving population is now controlled by the computer systems INFINTOR and MYKRONS, who have artificial intelligence (AI) that seems to be evolving. Through a network of micro surveillance cameras, the systems see all and in order to protect the people, no one has privacy of any kind. The internet has been taken away from average citizens, for their own safety. As the systems get more powerful, a renegade force called The Underground is attempting to take back control, but it terrorizes the night by harvesting organs and selling them on the black market (to the many people needing transplants due to the increased cancers and illnesses happening from the depleted ozone) to fund its rebellion. The story pits Captain Matagon, the champion of the AI systems and the law against Razor King, the champion of The Underground and its brilliant leader, Dr. Ozso Rukur. As conditions get worse, the lines begin to blur: which cause is good? which is evil? can evil be used for good -- or vice versa?

In a book that's sometimes reminiscent of Philip K. Dick's Do Androids Dream of Electric Sheep (upon which the movie Blade Runner was based), author T. W. Moore has written an imaginative, highly technical story of a future that seems realistic and possible. Moore provides extremely detailed scenarios of the states of technology, transportation, security, and medical advances that seem reasonable, though admittedly this reader isn't qualified to assess the legitimacy of any of the scientific verbiage and found it easiest -- and most enjoyable -- to read and accept what was presented.

In addition for Moore's ability to imagine and describe the technological aspect of this future world, he gives readers some richly drawn, very human characters. Captain Matagon, in particular, is fully fleshed-out as the flawed hero. Despite working for INFINTOR, Matagon has devised all kinds of ways to live under the radar and privacy invasions and though he admits machines are smart, he deems himself smarter. Readers will see Matagon's character grow, particularly in how he views the engineered Genetics (like Philip Dick's androids).

Author Moore is an excellent story teller and writer, and he connects all the loose ends so that most of the readers' questions get answered. The main plot of Matagon's quest to destroy The Underground never waivers, but along the way are numerous sub-plots, twists, and turns and a particularly satisfying epilogue. Towards the end, there's a bit of a deus ex machina, which is then explained away by previously undisclosed information from Meeksagon, Matagon's brother. It seems this could have been better handled by planting some seeds earlier so that the event wouldn't have seemed so contrived. Also, there were about a dozen errors (wrong words, misspelled words, dropped words, etc.) that could easily be fixed with another editing pass.

The book will have appeal to both adult and young adult audiences who are SciFi / Tech fans. Sensitive readers should be aware that there is violence, often bloody, but it's not overly graphic. There isn't any swearing and sex happens but isn't described at all.

Thank you to the author for providing me an eBook copy in exchange for my honest review -- the only kind I give.

(reviewed the day of purchase)
DIANE DONOVAN reviewed on Oct. 7, 2015

Alaska in 2080 is a very different place than the frozen tundra of our times: the icebergs have almost completely melted, and the ice is being hacked away in search of something long-buried. In parts of the world (such as Australia) the ozone is completely depleted, and a small nuclear war has completed what mankind began - so, for its own safety, the world is being run by quantum computers, which have taken over and prove to be somewhat unstable.

This book isn't about climate change or computers gone awry, however: these are just the backdrops for an even stranger scenario in which organ harvesting has run amok and the 'Razor King' is terrorizing the night with his vicious harvesting.

It will take a madman, a genius, or a hero to stop him - and 'Captain Matagon' is all three, charged with bringing down The Razor King. It should be evident by now that The Razor King is not just another dystopian read: it adds elements of intrigue, mystery, and suspense that places it on the crossroads of three genres: science fiction, thriller, and mystery.

Another bonus: more than a dose of high-tech atmosphere adds surprise and depth, while philosophical injections of perspectives on the human condition provides thought-provoking moments throughout.

The Razor King could have collapsed under the weight of all these facets under a different hand; but the mark of a superior production is its ability to seamlessly draw all elements together in a smooth, gripping read, and T.W. Moore achieves this in a saga of DNA resurrection and the costs of being human, while leaving the door open for possible further variations on the original theme.

Thriller, sci-fi and mystery readers alike will find it realistic, compelling, and hard to put down.

You have subscribed to alerts for T.W. Moore.

You have been added to T.W. Moore's favorite list.

You can also sign-up to receive email notifications whenever T.W. Moore releases a new book.