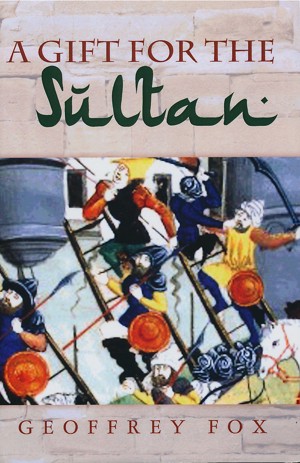 A Gift for the Sultan

By Geoffrey Fox
Rated 5.00/5 based on 2 reviews
Based on the true history of the siege of Constantinople in 1402 and the battle of Ankara, with a cast of historical figures and fictional composite characters, A Gift for the Sultan is a story of Christians versus Muslims, cosmopolitans versus anti-urbanites, the conflicts within each group, and the surprising complicities between supposed foes. More
The 1402 Ottoman siege of Constantinople stands as one of the great conflicts of history, a prelude to the Muslim conquest of that famous Christian city and Europe’s turn westward to the New World. It is this historic event and the cast of characters who changed the course of modern history that drive the action of A Gift for the Sultan. When the Christian leader secretly offers surrender, and throws in the key to the city and the 14-year-old Princess Theodota, the results can only be catastrophic. In this compelling and beautifully crafted novel, Geoffrey Fox pulls us into a conflict that took place more than 600 years ago...yet makes us feel as if we're in the middle of the action. Sieges by fierce armies, competing faiths and warriors, deception, love, and passion, everything delivered as high drama and a memorable read.
Available ebook formats: epub mobi pdf rtf lrf pdb txt html
First 20% Sample: epub mobi (Kindle) lrf more Online Reader
pdb
Price: $4.99 USD
Buy Add to Library Give as a Gift
How gifting works
Create Widget
Tags: historical adventure constantinople byzantine empire ottoman turks
About Geoffrey Fox

"He was like a man who had served a term in prison or had been to Harvard College or had lived for a long time with foreigners in South America."
― Carson McCullers on Jake Blount, in The Heart is a Lonely Hunter.

After graduating from Harvard, I worked in Venezuela and other Latin American countries, finally getting a Ph.D. in sociology (Northwestern U.) and teaching and writing on Latin American themes. I began writing fiction later, including a book of short stories, Welcome to My Contri (reviewed in New York Times, 1988) and many other stories in print and online journals. I have also written five nonfiction books on Latin America and many articles and reviews for print and online media, including The New York Times, Los Angeles Times, The Nation and others. A Gift for the Sultan, my first published novel (2010), has been translated into Turkish and published by Nokta Kitap, Istanbul (2012). I am currently (2014) working on a new novel about the Paris Commune of 1871. I live in southeastern Spain.

Geoffrey Fox presents A Gift for the Sultan
Author Geoffrey Fox describes how and why he wrote this novel, and shows us his home on the Mediterranean where he lives and works.

I forgot to give a rating. It easily deserves a five.

(reviewed 23 days after purchase)
Roger Lawrence reviewed on Sep. 5, 2011
(no rating)
I really enjoyed this book. The combination of myth, fantasy and reality made it a real page turner and one I would recommend to anyone - and this from someone who prefers science fiction.

A wonderful read, full of fascinating characters and intrigue. It opened a window into a world where Christianity and Islam managed to coexist through unusual arrangements. Much of the action takes places in Istanbul, one of the world's most extraordinary cities. The end is surprising and very satisfying.

You have subscribed to alerts for Geoffrey Fox.

You have been added to Geoffrey Fox's favorite list.

You can also sign-up to receive email notifications whenever Geoffrey Fox releases a new book.