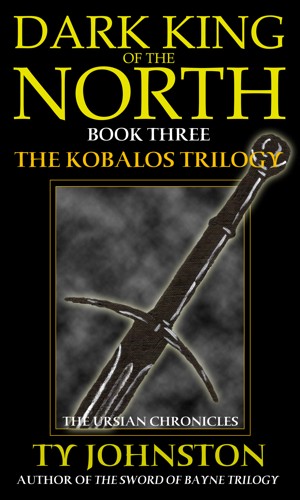 Dark King of the North (Book III of The Kobalos Trilogy)

Always on their trail is underworld crime boss Belgad the Liar and his crew of deadly killers. Not only does Belgad seek vengeance against Kron, but he also wants to capture Kron's friend, the healer Randall Tendbones, the last of Verkain's children whom the king wants dead.

For Randall's slaying would fulfill one more step in an ancient prophecy predicting the rise of the Dark King of the North, and Verkain believes he is this figure, ready to bring death and destruction across all lands, to rule with a hammering fist of iron.

It is in Kobalos, in the darkest of hours, alone with enemies all around, Darkbow becomes the last hope for all. But to defeat his foes, first he must learn to defeat his own rage.

City of Rogues: Book I of The Kobalos Trilogy

Road To Wrath: Book II of The Kobalos Trilogy

Blade and Flame: Prequel to The Kobalos Trilogy (short story)

Originally from Kentucky, Ty Johnston is a former newspaper journalist. He lives in North Carolina with loving memories of his late wife.

The Kobalos trilogy comes to a close with Dark King of the North. In City of Rogues we met Kron Darkbow and saw him wage a war of vengeance on local crime lord Belgad the Liar. In Road to Wrath he set out with Randall Tendbones and Adara Corvus to confront the freakishly powerful Lord Verkain, pursued by Verkain's war demons, an angry Belgad, and a professional duelist with grudges against Kron and Adara. Now, in Dark King of the North, everything comes to a head.

There's a potential issue in this story with Kron encountering enemies and allies so powerful that he becomes superfluous. However, even as war demons and a mage of mind-boggling power on one side do battle with a powerful wizard and a reincarnated god on the other side, there is still plenty of mayhem for Kron to revel in.

One of the beautiful things about the trilogy is how the story has been building up to this bigger-than-epic confrontation. Verkain is a horrifically dangerous opponent, and the stakes have risen and risen until Kron has no choice but to somehow try to stop him. The price he pays is high. He gets hurt. He loses friends. He gets hurt more. The things he tries blow up in his face, and he just has to pick up the pieces and try again.

It's very powerful storytelling, and it brings the trilogy to a satisfying conclusion. If you liked the earlier books you'll like this one. Dark King of the North could work as a stand-alone novel, but I'd definitely recommend reading the other books first.

I think I can see the author improving, as well. Ty Johnston is a writer to watch, constantly challenging himself, writing in various genres, expanding and honing his skills. The prose is still a bit rough, but it has improved over the earlier books. The kick-ass storytelling is still intact and working fine.

At three bucks it's a bargain, but there is now a Kobalos Trilogy omnibus edition that will save you a few bucks. It's gritty, hard-edged, action-packed sword and sorcery adventure, and I recommend you check it out.

This was the last book of the Kobalos Trilogy, so I was looking for everything to wrap up nicely. I think the author did this well. Most of the things I was hoping for at the end actually happened, so I was pleased with that as well. Good job, Ty.

I don't like to include spoilers in my reviews, so I'll be kind of vague here, but there was one character that was supposed to be sort of a bad guy, yet I never felt real animosity toward him. Ty did a great job painting one picture of the character, but also making the reader feel as if there was a little more to the guy; that he wasn't quite what he seemed. And the ending showed that my feelings all along had been true.

This book was as good as the other two in the trilogy and I thoroughly enjoyed it. Ty Johnston is a great writer, and I'm glad I found him!

You have subscribed to alerts for Ty Johnston.

You have been added to Ty Johnston's favorite list.

You can also sign-up to receive email notifications whenever Ty Johnston releases a new book.