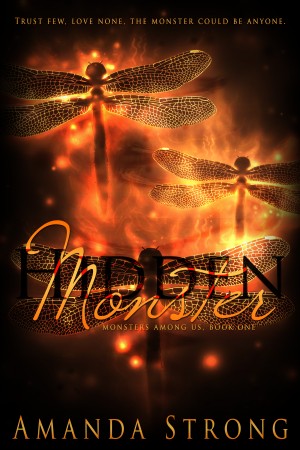 Born in Dekalb, Illinois, Amanda Strong has called Utah, Arizona, Hawaii, Virginia, and now New Mexico home. She has loved to spin tales since childhood. It was not uncommon to find her hiding in some random corner, scribbling away in her spiral-bound notebook, with her bright pink glasses. You could say some things have not changed.

Amanda signed with Clean Teen Publishing in the fall of 2013. She is the author of two paranormal, YA series: The Watchers of Men and Monsters Among Us.

The first novel in The Watchers of Men series, The Awakener, debuted in October of 2013. It has been an Amazon number one best seller in three Young Adult categories. Book two, The Holy and The Fallen, released May 12th of 2015. She is currently working on book three, The Watcher's Mark, releasing spring of 2016.

Hidden Monster released November 4th of 2014, and it finished as a Finalist in the 2014 USA Best Book Award: Young Adult Category. It is book one of a brand-new young adult, sci-fi thriller series called Monsters Among Us.

When Amanda isn't writing, you can find her chasing her three rambunctious children around the house and spending time with her wonderful and supportive husband. On some occasions, you can still find Amanda with her not-so-pink glasses, hiding in a corner reading her favorite young adult fantasy novels or working out only to blow her diet by eating ice cream.

About the Series: Monsters Among Us

A morning jog turns into a nightmare when a masked assailant abducts Samantha and keeps her captive, injecting her with a mysterious serum. When she's finally free, she discovers that she's changing — and that monsters are real…

Also in Series: Monsters Among Us

You have subscribed to alerts for Amanda Strong.

You have been added to Amanda Strong's favorite list.

You can also sign-up to receive email notifications whenever Amanda Strong releases a new book.