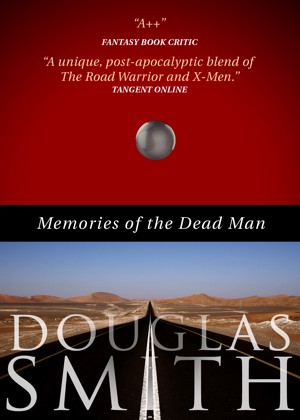 Memories of the Dead Man

By Douglas Smith
Rated 4.00/5 based on 1 reviews
SF novelette from a multi-award winning author.

A legendary hero of the Fall of Earth must choose between the love of the new family he has found and revenge for the one he lost. More
Multi-award winning author.

"Doug Smith is, quite simply, the finest short-story writer Canada has ever produced in the science fiction and fantasy genres, and he's also the most prolific. His stories are a treasure trove of riches that will touch your heart while making you think."
—Robert J. Sawyer, Hugo Award-winning author of Hominids and FlashForward

"A great storyteller with a gifted and individual voice."
—Charles de Lint

"One of Canada's most original writers of speculative fiction."
—Library Journal

DESCRIPTION:
On the run on a post-plague Earth, Mary and her teenage son, Jase, are saved by Bishop, a man with mysterious powers who just may be the Dead Man, the legendary hero of the Fall of Earth. But when Bishop’s dark past catches up with them all, Bishop must choose between his love for Mary and Jase, or revenge against the men who killed his wife and son.

REVIEWS:
"All that you want in a sf short story is here from powerful characters, to action, mysterious happenings, and a dark, violent, but excellent tale. … A bittersweet ending adds to the power of the story. (A++)"
—Fantasy Book Critic

"Shows off Smith's flair for the cinematic. ... Smith plans to write a novel about the Dead Man...I do look forward to reading it."
—Strange Horizons

"Memories of the Dead Man," has echoes of Stephen King wandering about its post-apocalyptic narrative."
—Quill and Quire

"...a wonderful example of the places this author is unafraid to go."
—SF Crowsnest Reviews

"...would make a great movie...a unique, post-apocalyptic blend of The Road Warrior and X-Men. Bishop's powers are well thought-out and explained, and Mary is a sympathetic and effective narrator."
—Tangent Online

"The style and subtleties of the storytelling kept me firmly on the edge of my seat. ... The characters were what really impressed me, though--by a few lines into meeting each one you had a clear and definable presence in your mind.”
—SF Crowsnest Reviews

ABOUT THE AUTHOR:
Doug is an award-winning author of speculative fiction, with over a million words of fiction sold and over a hundred short story sales to professional markets in thirty countries and two dozen languages.

Doug has twice won Canada's Aurora Award for speculative fiction, and have been a finalist for the international John W. Campbell Award, the Canadian Broadcast Corporation's Bookies Award, and the juried Sunburst Award.

"One of Canada's most original writers of speculative fiction." —Library Journal

"The man is Sturgeon good. Zelazny good. I don't give those up easy." —Spider Robinson, Hugo and Nebula Awards winner

"His stories are a treasure trove of riches that will touch your heart while making you think." —Robert J. Sawyer, Hugo and Nebula Awards winner

Douglas Smith is a multi-award-winning Canadian author of fantasy, SF, and supernatural fiction whose work has been published in twenty-six languages and thirty-two countries.

In 2010, an independent film producer released a multi-award winning short film based on Doug's story "By Her Hand, She Draws You Down." Films based on his stories "A State of Disorder" and "Memories of the Dead Man" are also in the works.

"Smith paints his worlds so well that you are transported within a paragraph or two and remain in transit until the story ends." --Broken Pencil, The Magazine of Zine Culture and the Independent Arts

"Douglas Smith is an extraordinary author whom every lover of quality speculative fiction should read." --Fantasy Book Critic

"Smith is definitely an author who deserves to be more widely read." --Strange Horizons

"I've yet to read a work of his that wasn't beautifully written, but more than that, his stories resonate with a deep understanding of the human condition as well as a characteristic wry wonder... Stories you can't forget, even years later." --Julie Czerneda, award-winning author and editor

"Smith is a master of beginnings ... some of the most well-crafted hooks you'll find anywhere: deft introductions to the characters and their not-quite-familiar worlds packed into just a sentence or two that draw the reader in. As for the endings ... Smith's tendency is to forego the shocking twist for endings that feel satisfying and right, a trade-off that I'll take any day." --Canadian Science Fiction Reviews

Also in Series: The Entity Stories

You have subscribed to alerts for Douglas Smith.

You have been added to Douglas Smith's favorite list.

You can also sign-up to receive email notifications whenever Douglas Smith releases a new book.