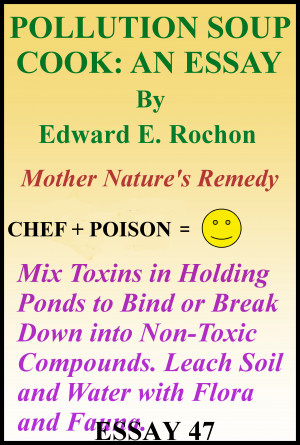 By Edward E. Rochon
We make reservoir soups of pollutants that interact to break down or bind pollutants. The water is filled and surrounded with appropriate flora and (perhaps) fauna to suck up toxins into their bodies. All plants and animals will be harvested for burning or storage. More
A brief preface cites previous works on pollution and briefly states purpose. Chapter 1 discusses the pollution chef concept. Toxins are brought into protected bodies of water to interact with each other in such a way as to bind dangerous chemicals or break them down into non-toxic or less toxic compounds. A science to create such soups and where to put them should be created. Many manufacturing chemicals are highly reactive, making them good seed for chemical reactions. Chapter 2 proposes that vegetation and animals fill and surround the reservoirs used to detoxify the agents. These would draw up seepage into the soil and help remove toxins. Whether the animals survived or mutated would not be germane as they would all be destroyed without breeding. Lower life forms should be used to avoid anthropomorphic quibbles about harming the animals. If necessary the animals could be excluded and plants used alone. It is hoped this is economical, scientifically sound, and practical without serious side effects. Such flora could be used to help detoxify farmland as well.
Available ebook formats: epub mobi pdf html
First 60% Sample: epub mobi (Kindle) Online Reader
Price: $1.00 USD
Buy Add to Library Give as a Gift
How gifting works
Create Widget
Tags: farming chemistry detoxification water purification soil purification
About Edward E. Rochon