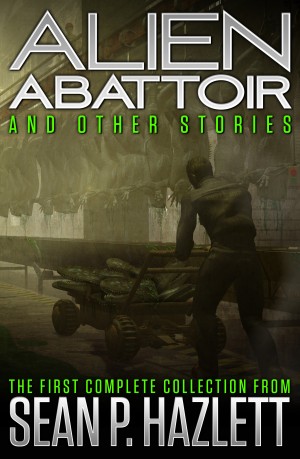 Alien Abattoir: And Other Stories

First published in venues like Fictionvale Magazine, NewMyths.com, Mad Scientist Journal, Plasma Frequency Magazine, Outposts of Beyond, and The Colored Lens, several of these stories have received Honorable Mentions in the prestigious Writers of the Future Contest.

This anthology is the first complete collection from Sean P. Hazlett.

Sean is a technology analyst and fiction writer who has published over a hundred research reports on clean energy, semiconductors, and enterprise software including Wall Street's first comprehensive market analysis of opportunities in the smart grid, which was cited twice in The Economist (See "Making Every Drop Count" and "Smart Grids: Wiser Wires"). His fiction has appeared in publications such as Writers of the Future, Grimdark Magazine, Abyss & Apex, and Weirdbook, among others.

Before becoming a technology analyst, Sean was a research associate at the Harvard-Stanford Preventive Defense Project where he worked on energy security issues that included the United States-India Strategic Partnership and policy options for confronting Iran's nuclear program. He won the 2006 Policy Analysis Exercise Award at the Harvard Kennedy School of Government for his work on policy solutions to Iran's nuclear weapons program. Sean also spent time at Booz Allen Hamilton as an intelligence analyst focusing on strategic war games and simulations for the Pentagon. Before graduate school, Sean was a cavalry officer in the United States Army where he trained American forces for combat operations in Iraq and Afghanistan at the National Training Center.

Sean holds a Master of Business Administration from Harvard Business School, a Master in Public Policy from the Harvard Kennedy School of Government, and bachelor's degrees in History and Electrical Engineering from Stanford University.

You have subscribed to alerts for Sean P. Hazlett.

You have been added to Sean P. Hazlett's favorite list.

You can also sign-up to receive email notifications whenever Sean P. Hazlett releases a new book.