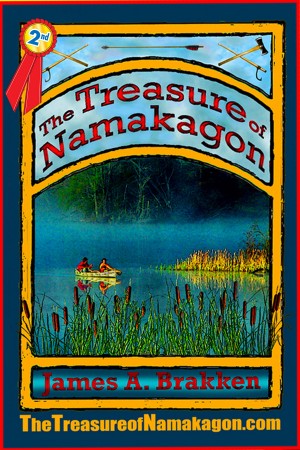 By James A. Brakken
A twisting, turning, thrilling "lumberjack" adventure that takes place during the northern Wisconsin timber boom of the 1880s.

Young lumberjack, Tor Loken, and old Chief Namakagon, work to foil a ruthless timber tycoon and protect the secret silver mine—a mine that truly existed and has yet to be rediscovered. 2nd place in the 2013 Amazon Breakthrough Novel Awards out of 10,000 worldwide entries. More
NOTE: This is the originally published version. Some minor details have been changed in later revisions. The story, though, remains the same. SEE REVIEWS FAR BELOW.

It is 1883 and you are about to plunge into the peak of nineteenth century lumberjack life in northern Wisconsin. Meet sixteen-year-old Tor Loken, whose father owns a remote lumber camp, the Namakagon Timber Company. Join the fight when a sinister lumber baron takes control of the river, threatening the future of the camp. Learn the way of the woodsman from your mentor, Chief Namakagon. This old hermit just may show you the way to his secret silver mine.

Be at the cook shanty table before dawn for breakfast with the men. Then it’s out into the cuttings where, knee deep in snow, you will help your camp harvest a hundred thousand giant pine logs this season. Hook up the Clydesdales to the water tanker and ice down the trails for the big timber sleighs. Take the train to the city for camp supplies but keep an eye out for cunning charlatans intent on an easy swindle. Spin a yarn or sing along with the other jacks in the bunkhouse. Go to town for a Saturday night of lumberjack merriment but dress warmly; it’s a six hour sleigh ride back to camp at twenty below zero. Come spring, you’ll help drive your camp’s timber down a thundering river, jumping from log to log as they rush downstream. Then it’s time to celebrate. But keep your pocketbook buttoned up when in town; there are bandits and thugs who want to separate you from your generous dollar-a-day wages!

Put on your red wool mackinaw and your calked boots. Grab your peavey or a pike pole. You’re in for a good look at life in the pinery in the 1880s . . . and a twisting, turning, fact-based adventure story that will often leave you breathless.

The legendary lost silver cache of Chief Namakagon will, most likely, be re-discovered one day. It's out there, waiting to be found. This book offers some clues about where to begin your search.

The Treasure of Namakagon is based on history. References to the Namekagon River log drives, life in the logging camps, and fraudulent timber sales are based on true events, as is the gun play that resulted from a ploy to charge for timber floated past the dam. Many historical references help make this tale as close to real life as can be found in a fictional adventure. Although many still search for Chief Namakagon’s secret silver mine, it has yet to be rediscovered.

Amazon Books
“The writing style of this piece is its greatest strength.” “The flow of the words is like an old fashioned song.”

"Open with caution. You won't want to put this one down."
LaMoine MacLaughlin, President, WI Writers Assn.

About the Author:
Bayfield County, WI, author, James Brakken, began writing in college when “Muskie Madness,” his story of a fishing trip with his father, appeared in Boy’s Life Magazine in 1974. More articles followed in Sports Afield, Out-door Life, Field & Stream, School Arts, and other publications.

His first novel, The Treasure of Namakagon (2012), features a boy in an 1883 northern Wisconsin lumber camp and Chief Namakagon’s legendary lost silver mine.

Treasure won 2nd place out of 10,000 worldwide entries in the 2013 Am-azon Breakthrough Novel Awards. Brakken also received the 2013, 2014, and 2016 Lake Superior Writers Award and the coveted Wisconsin Writers Association Jade Ring for his collection, The Moose and Wilbur P. Dilby plus 36 Fairly True Tales from Up North (2015).

Brakken earned statewide recognition for conservation as reflected in his Saving Our Lakes & Streams: 101 Practical Things You Can Do Today (2016). Brakken offers discounts of this book to conservation clubs and lake associations.

Alias Ray Olson (2017) is a true-crime thriller that exposes the truth behind the June 1939 homicides in Sawyer County and Wisconsin’s largest-ever manhunt. It’s a close look at the perceived guilt of a man con-victed in the press and hunted by hundreds.

Brakken’s INFAMOUS (2019) is another true-life, north woods crime novel from the 1930s. It chronicles John Henry Seadlund’s rise to Public Enemy #1 in only 4 years.

DARK: A Campfire Companion (2012) is an illustrated collection of 56 of the author’s delightfully frightening short stories and poems. It’s ideal for dark & stormy nights or for reading under the blankets by flashlight.

45 Fairly True Tales from the Old Corner Bar offers hilarious tales of life way back when. It’s a must-read for anyone who’s ever been “up north.”

Brakken’s most recent fact-based novel, Thornapple Girl,(2020) chronicles the life of Myra Dietz, a young woman caught up in her father’s 1910 struggle against lumber barons who denied him of his earnings. It is accompanied by the long overdue publishing of Myra’s lost 1929 memoir, edited by Sybil Brakken.

Of Brakken’s writing, Publisher's Weekly Magazine and Amazon Books said, “Difficult to put down. … A great read,” and “the flow of words is like an old fashioned song.” James Brakken illustrates most of his stories. All are intended for adults but great for younger readers as well. Find them at BadgerValley.com, where shipping to USA and APO addresses is free and state sales tax is paid by the publisher.

Learn more about James A. Brakken

Reviews of The Treasure of Namakagon by James A. Brakken

You have subscribed to alerts for James A. Brakken.

You have been added to James A. Brakken's favorite list.

You can also sign-up to receive email notifications whenever James A. Brakken releases a new book.