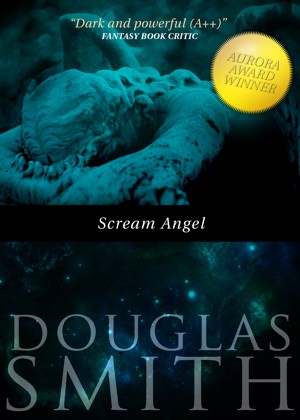 By Douglas Smith
The Angels. Aliens enslaved for the Scream they produce, a drug that turns pain to pleasure, grief to joy. Soldiers on Scream are remorseless killers. Jason Trelayne is such a soldier.

But when Trelayne falls in love with a Scream Angel, he triggers an epic struggle that pits him and a small band of fugitives against an empire.

Think of human emotion as a geography, with peaks of pleasure and valleys of pain. Imagine a drug that flips the valleys and makes them peaks, too. You react now to an event based not on the pleasure or pain that it brings, but solely on the intensity of the emotion created. Pain brings pleasure, grief gives joy, horror renders ecstasy.

Now give this drug to a soldier. Tell them to kill. Not in the historically acceptable murder of war, but in a systematic corporate strategy--of xenocide.

They will kill. And they will revel in it.

Welcome to the world of Scream.

Jason Trelayne is a Screamer, a soldier forced to take part in the destruction of entire races. But when Trelayne falls in love with a beautiful Scream Angel, an alien who produces the addictive drug, he sets off a chain of events that pits him and a small group of followers against an empire.

An award winning novelette of rebellion, love, and an unlikely hero.

"Doug Smith is, quite simply, the finest short-story writer Canada has ever produced in the science fiction and fantasy genres, and he's also the most prolific. His stories are a treasure trove of riches that will touch your heart while making you think." --Robert J. Sawyer, Hugo Award-winning author

"A great storyteller with a gifted and individual voice." --Charles de Lint

"One of Canada's most original writers of speculative fiction." --Library Journal

"A dark and powerful story with a first line that sets the tone for what is to come: 'They stopped beating Trelayne when they saw that he enjoyed it.' (A++)" --Fantasy Book Critic

"A visceral work. A true pearl of the fantastic literature. Breath-taking." --Café de Ontem
"...the book's most skillfully crafted story...quickly becomes one that holds the reader's attention until the very end." --SpecFicWorld

"...remind me of the reasons I love the author's writing: his characterization, attention to detail and recurring themes of love, faith and redemption." --SF Crowsnest Reviews

"The story has so many layers that I'm still sorting them out. And like an onion, I'm not sure if I'll ever find the final layer." --Tangent Online

"One of those rare ideas that seems at once so perfect and so natural that someone must have come up with it before; but if someone has, I haven't heard about it, and regardless Smith exploits the potential of the idea extraordinarily well here." --Strange Horizons

ABOUT THE AUTHOR:
Doug is an award-winning author of speculative fiction, with over a million words of fiction sold and over a hundred short story sales to professional markets in thirty countries and two dozen languages.

Douglas Smith is a multi-award-winning author described by Library Journal as "one of Canada's most original writers of speculative fiction."

His books include The Wolf at the End of the World, Chimerascope, Impossibilia, Playing the Short Game: How to Market & Sell Short Fiction, and the upcoming YA urban fantasy trilogy, The Dream Rider Saga (The Hollow Boys, The Crystal Key, and The Lost Expedition).

Published in 27 languages, Doug is a 3-time winner of Canada's Aurora Award and has been a finalist for the Astounding Award, CBC's Bookies Award, Canada's juried Sunburst Award, and France's juried Prix Masterton and Prix Bob Morane.

"The man is Sturgeon good. Zelazny good. I don't give those up easy." —Spider Robinson, Hugo and Nebula Awards winner

"His stories are a treasure trove of riches that will touch your heart while making you think." —Robert J. Sawyer, Hugo and Nebula Awards winner

Also in Series: The Entity Stories

You have subscribed to Smashwords Alerts new release notifications for Douglas Smith.

You have been added to Douglas Smith's favorite list.

You can also sign-up to receive email notifications whenever Douglas Smith releases a new book.