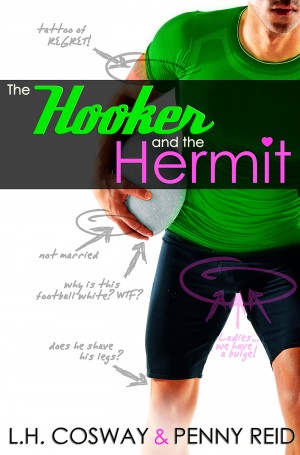 The Hooker and the Hermit

Rated 5.00/5 based on 1 review
When Ronan is sent to Davidson & Croft Media to reshape his public image, he never expects to cross paths with shy but beautiful Annie, nor does he expect his fierce attraction to her. He couldn’t be happier when her boss suggests pairing them together.
What lengths will Annie take to keep her virtual identity concealed? And what happens when the hooker discovers who the hermit really is? More
New York’s Finest
Blogging as *The Socialmedialite*
April 22
LADIES AND GENTS! I have an announcement!

You know that guy I featured on my blog a few months ago? The really, really hot Irish rugby player who plays the position of ‘hooker’ in the RLI (Rugby League International)? The one with the anger management issues, the body of a gladiator and the face of a movie star? The one with the questionable fashion choices leading me to ask whether he was the lovechild of a leprechaun and a hobbit? Ronan Fitzpatrick? Yeah, that guy.

Well, I have a confession to make…

Annie Catrel, social media expert extraordinaire at Davidson & Croft Media and clandestine celebrity blogger, can make anyone shine in the court of public opinion. She is the Socialmedialite, anonymous creator of New York’s Finest and the internet’s darling. Virtual reality is Annie’s forte, but actual reality? Not so much.

Ronan Fitzpatrick, aka the best hooker the world of rugby has seen in decades, despises the media—social or otherwise. The press has spun a web of lies depicting him as rugby’s wild and reckless bad boy. Suspended from his team, Ronan has come to Manhattan to escape the drama, lay low, fly under the radar. Only, Ronan isn’t easy to overlook, and he can’t escape the notice of the Socialmedialite…

When Ronan is sent to Davidson & Croft Media to reshape his public image, he never expects to cross paths with shy but beautiful Annie, nor does he expect his fierce attraction to her. He couldn’t be happier when her boss suggests pairing them together.
What lengths will Annie take to keep her virtual identity concealed? And what happens when the hooker discovers who the hermit really is?

Penny Reid is the New York Times, Wall Street Journal, and USA Today bestselling author of the Winston Brothers and Knitting in the City series. She used to spend her days writing federal grant proposals as a biomedical researcher, but now she writes kissing books. Penny is an obsessive knitter and manages the #OwnVoices-focused mentorship incubator / publishing imprint, Smartypants Romance. She lives in Seattle Washington with her husband, three kids, and dog named Hazel.

About the Series: Rugby

A collaboration between LH Cosway and Penny Reid.

Reviews of The Hooker and the Hermit by Penny Reid & L.H. Cosway

The hooker and the hermit is the first book that is writing by the writers L.H. Cosway and Penny Reid together. And I can tell you it calls for more books from this duo. I was already a big fan from L.H. Cosway but this was the first time I have read something from Penny Reid but it will not be the last time!!

Annie Catrel (= the hermit) is a woman whose life consists of her job at Davidson & Croft Media as a social media expert and her secret hobby as a celebrity blogger aka ‘The Socialmedialite’. Annie lives her life behind the computer, unlike her real life that is lonely but safe, her virtual life is filled with friends (although she has never spoken or seen one of them in real life!) and excitement. But that’s the way Annie likes it.

But that’s about to change. One day at work she meets the hot Irish rugby player Ronan Fitzpatrick (= the hooker) for the second time (only he doesn’t know that) . Ronan Fitzpatrick has had a bad time, first he discover his fiancée having sex with one of his teammates, then he lost his temper and fought with this teammate during a game. So now he’s suspended from the team! His plan is now to come to Manhattan (away from the scandal in Ireland) and live a quiet life while working on his condition untill he gets back on the team. But that’s hard with the paparazzi lurking around and now someone called ‘The socialmedialite’ is blogging about him!! Ronan is so angry about this that he decides to send this blogger an angry email.

But his management think that it’s about time for Ronan to reshape his public image, so they send him to Davidson & Croft to do that. This is where he meets Annie for the first time (or so he thinks!). He feels an instant attraction to her. He likes it that she’s shy and a little different than other women he knows. So when her boss suggests that Annie will work with him he couldn’t be happier. That’s the opposite about how Annie feels about this news. But her boss leaves her no other choice.

So here starts the work relationship between the two of them. A relationship that Ronan hopes will change in a love relationship but this could be hard. Because not only is Annie shy and a little bit antisocial, she also has had a difficult childhood. Something that made her decide to stay far away from love. And what Ronan also doesn’t know is that the person he sends emails to, the person he knows as ‘The sociamedialite’ is Annie! So you see there is a lot going on in this story and then you also have Roman’s mother and his ex-fiancée who aren’t happy with this relationship!!

Like I said before, I didn’t know what to expect from this book, since it was the first time that these writers wrote a book together but I can tell you now that I just fell in love with this book! I love the humor in this book, the emails, the twitters (or twatters like Ronan likes to say). I really hope that L.H. Cosway and Penny Reid will write another book together. Fingers crossed!

You have subscribed to alerts for Penny Reid.

You have been added to Penny Reid's favorite list.

You can also sign-up to receive email notifications whenever Penny Reid releases a new book.