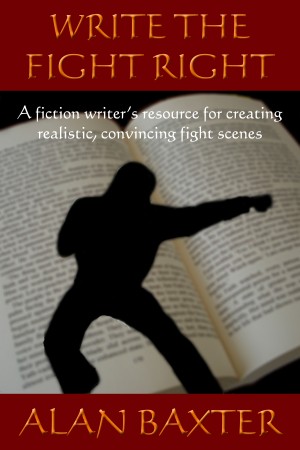 Author and martial arts instructor, Alan Baxter, presents a short, ~12,000 word, ebook describing all the things a writer needs to consider when writing fight scenes. Baxter's experience from decades as a career martial artist make this book a valuable resource for writers who want to understand what fighting is all about - what it really feels like and what does and doesn't work - and how to factor those things into their writing to make their fight scenes visceral, realistic page turners. Baxter won't tell you how to write, but he will tell you what makes a great fight scene.
Available ebook formats: epub mobi pdf rtf lrf pdb txt html
First 40% Sample: epub mobi (Kindle) lrf more Online Reader
pdb
Price: $2.99 USD
Buy Add to Library Give as a Gift
How gifting works
Create Widget
Tags: writing martial arts fight fighting fight scenes
About Alan Baxter

Reviews of Write The Fight Right by Alan Baxter

Alan Baxter is a writer and a kung fu instructor, and if that sounds like a handy combination, it is. Write the Fight Right (WtFR) draws on his experiences in the dojo and the odd real-life street confrontation to help writers bring a touch of reality to their fight scenes.

Baxter helpfully breaks the book into several sections, broadly starting with how fights actually unfold in real life, and in particular showing which factors are the most important in determining the outcome (footwork, reach, training, size and – crucially – the ability to not be where the other guy is throwing a punch). The second set of chapters describe the physiological elements of a chaotic punchup – adrenaline rushes, the effects of pain, getting knocked out – and the mental side of things - how fear and anger matter, what a fighter might see and hear, the psychological benefits of training and so on. The final part deals briefly with weapons, with the take-home message that pulling a knife or a club or a sword out is an orders-of-magnitude escalation of a violent situation, to be avoided at all costs by anyone with a shred of sanity. The book is rounded out with a helpful checklist, summarising the things a writer could consider in putting together a fight scene.

Throughout the book Baxter keeps his eyes firmly on bringing these elements out in tight, well-focused writing. There’s a lot to consider but his advice is not to overegg an action scene: “Don’t try to use everything , but pick and choose things that suit the kind of fight you’re writing or the kind of environment you’re setting the fight in. Also think hard about your characters and what kind of experience they have and what sort of personality they have, which will affect their reactions and perceptions of fighting.”

Baxter has a good nose for the sorts of clichés used by writers with little to no experience of physical altercations (me included) and exhorts the reader to get rid of them. It’s all good, sound advice written in a practical and no-nonsense style. Baxter comes across as a natural teacher; his explanations are clear and his conversational language gives the whole piece the air of a convivial bar conversation. WtFR isn’t a long book – more like a longish essay – but it is a readable and useful reference work for writers whose genre fiction includes a good splash of biffo.

(reviewed 6 months after purchase)
ianmchugh reviewed on May 3, 2011

This is a very well considered, credible writing tool, packed with details that writers who aren't themselves experienced fighters would be likely to miss. Clearly presented and well constructed for easy digestion and reference.

Short, concise and very informative. Written from a background that gives the content solid credibility it is something all writers who need to write or understand a fight scene (or more for that matter) needs to know.

Recommended reading for all writers who don't have black belts of their own.

(reviewed 22 days after purchase)
Ross Hamilton reviewed on April 27, 2011
(no rating)
Well worth the small monetary investment - very useful material for any writer who incorporates action like this into their work.

Excellent, i found it factual and informative. The author knows his techniques and on all levels gives good advice to fellow writers.
I have already recommended this book to others.